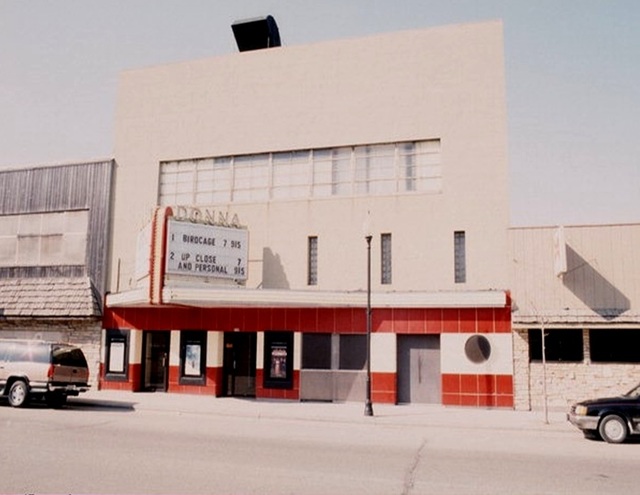 Since the fall of 2000, the former Donna Theatre has housed the Third Avenue Playhouse, a legitimate theater.

In 1963, the Donna was operated by Delft Theaters, Inc, out of Butler, WI. John Schuyler was president and general manager. Delft also operated the Victory Drive-in in Butler, the Winnebago Drive-In in Wisconsin Dells, the Cosmo in Merrill, the Aqua in Minoqua, the Woods in Woodruff and the Al Ringling. Besides the Wisconsin theaters, Delft also operated many Michigan houses in the early sixties.

The December 9, 1950, issue of Boxoffice Magazine announced the recent opening of the Donna Theatre “…after many delays in construction.” The architect was named as Urban F. Peacock, of Milwaukee. The article says that “The theatre is named after Mrs. Donna Borchert, owner of the Donna and the older Door Theatre here.” A Mr. Herman Graefe was named as being the manager of both houses.

First owner’s wife was Madonna aka Donna. According to his death notice (published in The Billboard, January 31, 1942) and the opinion of the court rendered June 15, 1951 in Borchert v. Mueller, his sole heirs were his wife, Madonna, his mother Minna, and his son, Roderick. His name, as it happens, was Frank Borchert, and he died January 7, 1942.