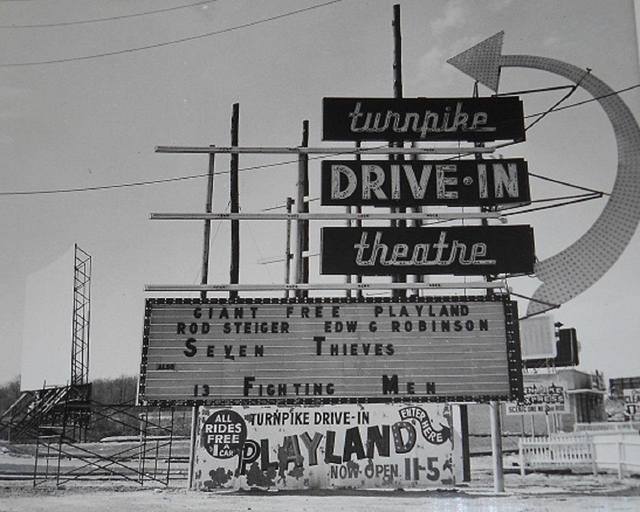 The theatre’s design was the same as the Plainfield/Edison Indoor/Outdoor on Oak Tree Road, in Edison.

This design was typical for UA in early-1960’s, as the Route 46 Totowa Theatre was of the same design.

The theatre showed the initial roadshows of Sensuround pictures “Rollercoaster” and “Midway” during the 1970’s.

Joe, that is a great article! Thanks for posting. It seems to confirm something I have long suspected: that the chain of NJ “U/A” Drive-ins were not actually built by U/A, but were acquired as a chain at some point during the decline of drive-in popularity. In my experience U/A certainly did not seem to take a lot of interest in maintaining them.

I wonder how many theaters the Appleman family built to this general design? I know of The Turnpike Drive-In, The Plainfield-Edison Indoor/Outdoor Theatre, The Somerville Drive-in, and I was always told that the now demolished “Birch Hill” nightclub near Old Bridge NJ had been a U/A Drive-in at one time. I am assuming these were all built by the same people (presumably the Applman family) because they share a similar look.

Appeal for information: the Turnpike Drive-In had a large-scale miniature railroad that ran in a big figure “8” around the grounds near the marquee. It would have been visible from the major roadway that runs past the theatre. I would like to hear from anyone who has memories of this train ride actually operating. A scan of a photo would be a great find.

You see, my family managed to save a little piece of the Turnpike Drive-In. About 1988 we answered an ad from a scrap metal dealer that ran in The Paper Shop. The advertiser sold us the remains of the passenger cars from this little train; apparently this was the scrapper who had been contracted to tear down the theater for redevelopment.

One of these days I’d like to rebuild the cars to the way they looked when new at the Turnpike Drive-in. I know what the bodies looked like, but a photo would be tremendously helpful in recreating the original paint scheme and lettering.

Does anyone know when this kiddie train concession stopped running? I visited the Turnpike Drive-in while it was still showing movies indoors and out (late 1970s/early 1980s) but by that time the train was rusting inside a wooden shed, and the shed roof had actually collapsed on the train in places. There was not much left to buy from the scrapper – but we saved what we could.

If you have a memory or photo to share of the train ride at the Turnpike Drive-In please feel free to drop me an email:

Hi Guys. I remember riding that train. I remember the loop up by rt. 18 but I can’t remember how far back it went. I don’t think it made it all the way to tice’s lane. I’ve often wondered what ever happen it. The oldest I would have been was 10 or 12 I think. So it ran until at least 66 but more like 1970 or so. It sat in that little shed for the whole time that the drive in was open I guess. Thanks for the memory. Those tall thin steel cans of “yoohoo” and paper drinking straws. thanks again…..Gary

This opened on March 19th, 1958. I uploaded the grand opening ad in the photo section.

I was raised mostly in East Brunswick so I remember this theater well.. I did ride on that train when I was very young. Our family needed money for a while so my dad got a night job working in the sit down theater for a few months. Another story: My brother and I and some neighbor friends walked into the place one Saturday morning from the woods behind it. We were basically trespassing. I guess it was the manager or someone drove up to us and asked what were we doing. We didn’t know, we were just wandering around, far from home. We asked him for some free passes. He said no but somehow we worked out a deal where if we cleaned up all the trash that people threw out their car windows the Friday night before. He’d give use some free tickets. Looked like acres of trash. It seemed like it took forever but we picked up all the trash and we got free tickets to one movie. We kept showing up for a few weeks after that each Saturday morning and got free tickets each time. I recall one movie we saw with those tickets. It was Hard Days Night. One time the guy fronted us the tickets because we came late and the trash was already picked up. He told us to come on Sunday morning instead. We didn’t show! He thought we burned him. We showed up the following Saturday and made good on it. Another story:As we go older and in High School, we used to hide people on the floor in the back of the car and sneak them in. Another story: My buddy JB had this Pontiac Lemans, I think that’s what it was. It was a convertible, red. He’d pull in with the top down and buy a ticket. This was a huge car with a giant trunk. We were able to hide 5 guys in that trunk. They weren’t at all suspicious. Another story: I had a date one night and we were watching “Night Of The Living Dead”. I had to go and use the bathroom. She locked all the doors. After I was done I sneaked up to the car and shook it. She was so scared, she peed on the front seat. I don’t know if I stayed on topic or not. I figure someone might get a kick out of reading this. Shoots. I turn 67 in a couple of weeks. It might be the last time I get to tell any of these stories.

Final night of operation for the drive-in was September 3, 1984 with “Bachelor Party” and “Porky’s”