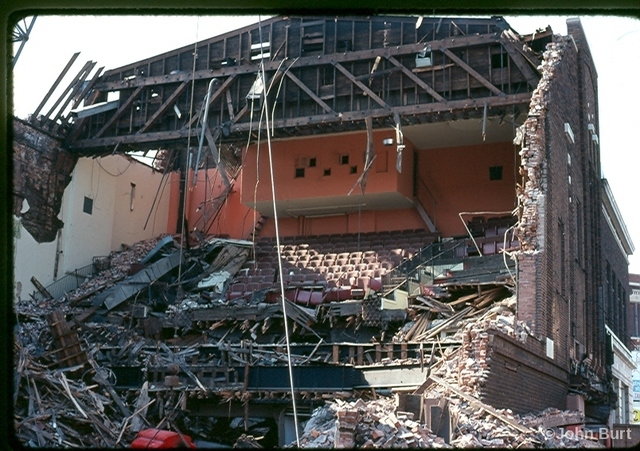 The Plumb Opera House was opened on August 31, 1883. It was closed in June of 1920 presenting live events and occasional movies. It was remodeled to the plans of architect William Arthur Bennett and had been taken over by Publix Great State Theatres. It reopened on October 28, 1920 with Norma Talmadge in “The Branded Woman”. It was purchased by the Kerasotes Theatres chain in 1973. They closed it on August 14, 1979 with Sigourney Weaver in “Alien”. Closure was due to engineers finding structural problems in the foundations of the building. It was demolished in June of 1980.

When it became a Publix theatre and was given a newer look, they may have eliminated boxes along the sides of the auditorium to widen the proscenium. They may also have done so to add the organ pipe chambers. The CinemaScope screen was 35' wide and filled the stage to the proscenium edges. The projection booth was built over the last row of seats in the balcony, and the downward angle was about 23 degrees. This resulted in a significant keystoning of the picture. I can remember being in the house for the first showing of “The Robe” and noting that the edges of the picture actually hit the proscenium edge. That was later corrected when they had a chance to fine tune the projector apertures, but it does indicate that the proscenium had been widened at some point. It also seems to me that the stage was narrower than 33' deep. When I was growing up, the Plumb still had a stage show once in a while, but they consisted of performers from the WLS National Barn Dance or Dr. Silkini. While both shows carried a scenic drop before the CinemaScope screen was put in and couldn’t be flown, the performances could easily fit on a stage with less depth.

I might add that while the CinemaScope screen was slightly curved to the Fox specification, the curvature wasn’t deep enough to fit a 35' screen into a 27' proscenium, so some modification must have taken place.

It occurred to me after some thoughts about the stage dimensions listed above that I had never seen the whole stage depth. Either the picture sheet was flown in, or the CinamaScope screen was anchored to the stage. Thus the stage would seem more shallow. There was an asbestos drop and a traveller in front of the screens so they sat upstage of the proscenium at least a few feet. When Dr. Silkini did his last show there, they tied the traveller against the CinemaScope screen which allowed enough depth for him to do his act in between it and the foots.

In the case of the 27' width, as noted above, the Scope sheet was curved which would have shortened the width of the chord across the screen. In addition, if the screen was upstage a bit, the image might have been 27' at the proscenium and then widened out a bit more before it hit the screen. The edge of the picture would have been slightly trimmed as viewed from the seats toward the front and at the outer edges of the seating area, but that wasn’t unusual in proscenium houses.

The pit would have indeed held just about six musicians.

At any rate, thanks to Ron Salters for coming up with the dimensions which probably remained as listed in the material he cites. Various people who lived in Streator have shared their memories over the years, and most of them mention the Plumb. It’s nice that it won’t be completely forgotten.

REandres- please do not fret too much over the info above from the Cahn Guide ! Those guides are full of errors. They were published every year in the late-summer for the benefit of roadshow producers and stage managers. Julius Cahn was a New York theatrical agent. In an age long before computers he must have struggled to maintain an accurate data base every year. The info about the Plumb from the Guide may or may not be 100% accurate.

Ron – thanks. I’m a little obsessive about theatre layouts because figuring out viewing angles for various projection situations was a big part of what I did at Radio City where we were constantly dealing with the demands of touring concerts and television productions. I wish I had the knowledge that I gained there when I worked at the Plumb. All of the big names in vaudeville played the house (and the Majestic up the street), so Cahn’s data base was probably accurate as far as the stage layout. It would be interesting to see documentation of both the original house and the changes made by Publix. Even after the transition, there was still a ledge running the width of the balcony designed to hold lighting instruments. The booth was probably enlarged at that time as well, suspended from building beams over the last row of seats in the balcony with the capacity for two spotlights as well as the film projectors. Unfortunately, preservation of theatre plans wasn’t given much thought, so records are sketchy at best. That’s one of the great things about Cinema Treasures — it allows for a collective memory to keep at least some aspects of these theatre alive.

From the 1940s a newsprint photo of the Plumb Theater in Streator. 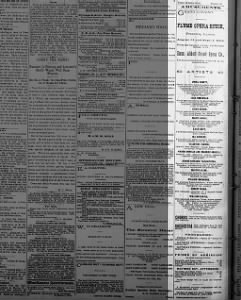 RobertEndres… do you happen to know if the WLS Barn Dance did a show at Streator’s Plumb Theater, and what the date may have been? Thanks, Jess

The WLS Barndance definitely appeared at the Plumb Theatre. We listened to it almost every Saturday at home so when they played the Plumb my Father and I went to hear them. I’m not sure of the date but it was before the Plumb installed CinemaScope in 1952 as they used the full stage. They carried a “barn interior” drop and had bales of hay onstage. I think Lulubelle and Scotty may have been the headline act as they were popular at the time. (They also played the high school auditorium and I saw them in both venues so I’m not sure which act I saw where.) They played after a movie at the Plumb and there was a small hole in the house traveller and I remember seeing the picture sheet being flown out just before their performance. Those performances probably inspired my own career which led to the Music Hall.

Actually there’s a typo in the above. The Plumb Theatre installed CinemaScope in December of 1953 and opened with “The Robe” on New Years day in 1954. I was a Freshman in high school and was down town when I saw the RCA truck pulled up to the stage door. I had been looking forward to CinemaScope and rushed over to look. When the manager, who was a neighbor, saw me he asked me to help unload the truck. I was so thrilled to be asked it didn’t even occur to me to ask for pay.