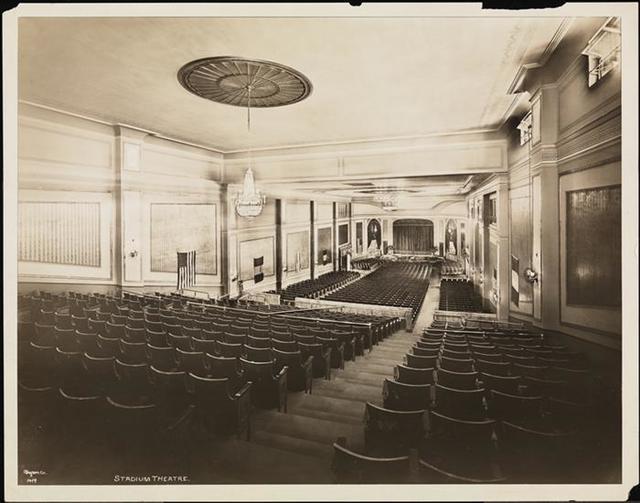 Time has forgotten this neighborhood cinema on Third Avenue at E. 119th Street. The Stadium Theatre opened in 1921, and was one of NYC’s first to convert to Spanish-language films (circa 1938-39) becoming the Sun Theatre. It was listed as (Closed) in 1944. More information is needed about its history. A property search suggests that the building was last in retail use as a furniture showroom. It was demolished in the 2000’s, and a school occupies the site today.

Am I crazy, or does the vintage interior photo posted by Warren on December 10, 2008, show what appear to be a pair of open transom windows at the top of the side wall of the elevated loge seating? Further down along the same wall, in the orchestra section, there may also be sets of windows just below the ceiling. Odd for a purpose-built cinema. If one manipulates the street view down 119th Street, the windows evident along the sidewall of the old building would seem to correspond to the suspected windows seen in Warren’s photo. In the street view, all the glass looks like it was blacked out.

Studying the picture. I think the building was extended.. The Original Lenth I think was to the Exit on the Left.. (6 Bays) We did a similar thing to Our Cinema in Birmingham England… (The Capitol) in 1929

The 1921 Film Daily item I cited did say that the Stadium’s site was 50x185 feet, and considering that the stadium-seated section was over the lobby then the original auditorium could have been more than three times as deep as it was wide and still leave plenty of room for projection booth and a stage.

There is a newer Google Street View of 119th Street now, so the side view of the old building is gone. I wish I’d saved a screen cap of it.

Does anyone know the name of the theater next door to the Michigan Furniture Company in the 1905 photo at iatse311’s link? A banner over the door says “Moving Pictures” so it should probably be listed at Cinema Treasures. It looks like it was down the block a few doors from the site of the Stadium, probably at 2172 Third Avenue.

Looking back over the old comments, maybe the unknown theater was the Globe, which AlAlvarez asked about in this comment?

The name on the arch did end with an S, so that must have been it. I wonder if it was later renamed the Globe? We don’t have any theaters but the Stadium listed for the blocks of Third Avenue to either side of 119th Street.

I smell a new listing forthcoming…

I agree with Tinseltoes. How did the projection beam get around the chandlier in such a shallow house? Maybe the photograph is deceiving, but it certainly gives us good cause to wonder.

Actually, there’s plenty of clearance for projection from the back of the house even if the booth were a few feet above the back row of seats. While the view may be exaggerated, that’s still pretty small screen, and at the point where the projector beam crosses under the chandelier the size of the image would be very small, possibly less than a foot square. At the halfway point in the auditorium the picture would be only one-quarter the size it would be when it got to the screen. Further clearance would also have been gained by having each of the two projectors off the center line of the auditorium where the chandelier is hung. In addition, both machines would be shooting at a slight downward angle which would add more clearance.