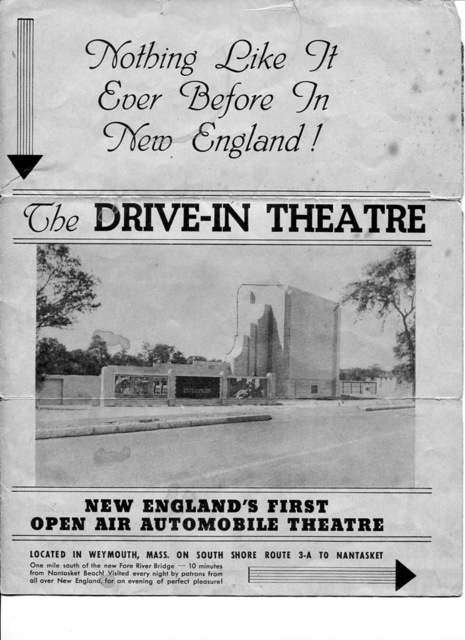 Opened on May 28, 1936, the Weymouth Drive-In was the fifth to be built in America. It was located on the west side of Bridge Street (State Route 3A) just north of the bridge to Hingham. With a 600-car capacity, it drew patronage from Weymouth, Hingham and Quincy. It lasted until 1964 when it was demolished and a new twin-screen drive-in was built. Each screen had a capacity for 800 cars. It was closed in April 1976. After demolition, a mall anchored by a K-Mart occupied the property; this was later demolished for a new mall anchored by a Lowes Home Improvement store.

There is a poster or ad for the Weymouth Drive-In reproduced in the Arcadia Images of America book “Weymouth” by Sullivan & Tighe, 2001.The copy says “Elderly, invalids, fat people and tall people may enjoy the show in comfort and privacy without leaving their cars. Bring the family and even household pets if you wish!” Admission 35 cents per person, kids under 10 free, No Charge for Car". Last show at 1030PM, enter or leave any time. The authors write that it opened on May 28, 1936. There were 6 uniformed concession boys who went around to the cars with baskets of refreshments. It had electric heaters for the winter. They say that in 1965 it went from 8 acres to 22 acres when 2 screens were added. Closed in 1976. We know they added one screen, not sure about 2.

The poster described above dates from 1938.

When it changed to 2 screens it was completely rebuilt and re-oriented. You can see the changes on HistoricalAerials.com from 1955 to 1969.

Went to the Weymouth Drive-in many times coming up th 11 miles from Scituate. Yes it was the 5th Drive-in in the U.S. It was twinned in the early 60’s after the 1st screen blew down in a hurricane. Went with my family to see Jack Webbs Dragnet and there was a huge thunderstorm and the power went out i the whole area. Were issued rainchecks. Went to Woodstock there in 1970 with my soon tobe wife. I believe it closed shortly after that when they built a SMALL mall anchored by K-Mart and a Cinema complea and Purity Supreme supermarket.

The Weymouth Drive-in was never triplexed.

The Archives section of Aug.20 Quincy Patriot-Ledger reproduced an ad for the Weymouth Drive-In from August 1937. The ad copy says “Sit in your Car – See and Hear the Movies! New England’s Only open air auto theatre” (I don’t know how accurate that claim was.) Below that it says: “Drive-In Theatre Weymouth. Continous Nightly, rain/shine. Last Show 10PM” Movie playing was “Here Comes Carter”. Located on “South Shore Route 3A to Nantasket”.

my dad and another gentleman built the drive-in. I can’t remember his name but my father sold his half to this man. When I was a kid my dad built another with his lawyer (Sy Queen) in Clinton Ma. In Weymouth the surrounding neighbors complained about the loud speakers used for the sound. Of course this was before the in car speakers. Also I have an interesting story about the man that asked Joe if it would be all right for him to sell food from a cart. Joe’s response was ok but you can’t bother the customers. The cart would have to remain stationary. As it turned out food service became the real profit of Drive-Ins. I refer to my dad’s partner as Joe because I think his name was Joe Dimambro.

In my earlier comments I referred to a gentleman as J. Dimambro as my dads partner. I just came across a website mentioning the owners of the Weymouth Drive-In in a law suit. They were Tom DiMaura and James Guarino. I think my father was smart enough to get out before these issues hit the fan. http://www.umich.edu/~drivein/theater_02.html

The name of the person who built the Drive in with your father was Joe Buschini. He built a couple more for Richard Hollingshead after Weymouth.

The April 2, 2019 issue of The Patriot Ledger included an article titled WHATEVER HAPPENED TO: The Weymouth Drive-In.

It opened on May 28, 1936, the fifth drive-in to be built. (Kerry Segrave’s book Drive-In Theaters says the date was May 6, 1936, per Billboard.) It was one of the few to get a license from the patent holder, Park-In Theater of Camden, NJ. “The builders were Thomas G. DiMaura, a contractor, and James Guarino of Milton.”

At the start, the Weymouth had noise problems, sometimes audible from five miles away. It used pole speakers in the 1940s, then in-car speakers in the 1950s. “In 1964, the original theater was torn down and the site expanded to make room for a two-screen (capacity 800 each) drive-in complete with a playground, a modernized concession stand and in-car heaters so the theater could remain open year-round.” But the Weymouth closed in April 1976.