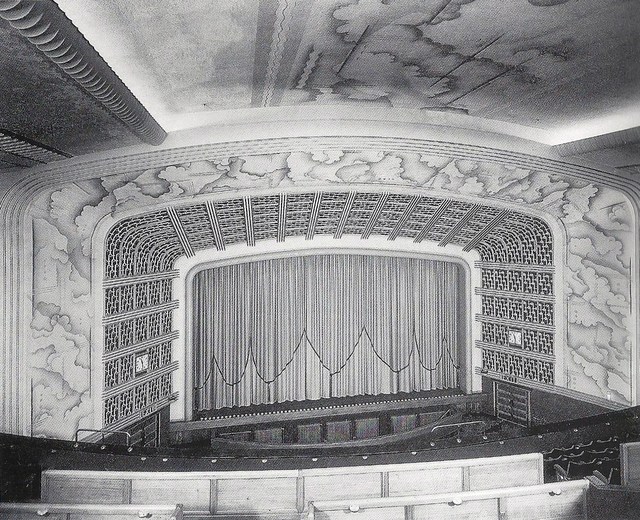 Located in the east London inner-city district of Shoreditch. The Mayfair Cinema was built on the site of the Brick Lane Palace Theatre. It opened on 29th January 1936 with Kay Johnson in “Jalna” and William Powell in “Escapade”. It was built as an independent for D.J. James and was taken over by Eastern Cinemas in 1937. The facade was flat and faced with white faiance tiles with the name ‘Mayfair’ across the top, under which was a black tiled panel which had the weeks attractions spelt out in moveable letters. Seating in the auditorium was in stalls and balcony.

Eastern Cinemas became part of General Cinemas Financing (GCF) who were later merged with Oscar Deutsch’s Odeon Theatres Ltd in 1943. The Mayfair was re-named Odeon from 20th February 1950. It was closed by the Rank Organisation on 22nd July 1967 with Stuart Whitman in “Those Magnificent Men In Their Flying Machines”. It was immediately sold to an independent operator who re-opened it on 31st July 1967 as the Naz Cinema screening Bollywood movies.

After a while, it was closed and became used as a store and indoor car park which continued until the late-1990’s when it was demolished and a block of flats known as Odeon Court was built on the site of the auditorium and a restaurant, currently known as Cafe Naz was built on the site of the foyer area. The facade was retained, but has been painted black over the cream faiance tiles, but the original ‘Mayfair’ name has been revealed again after being covered over for several decades.

An October 2004 view of the facade of the former Odeon, Stepney. This is all that remains of the original building. Hidden under the black paint are the original white faiance tiles:
http://flickr.com/photos/53257210@N00/115459482/