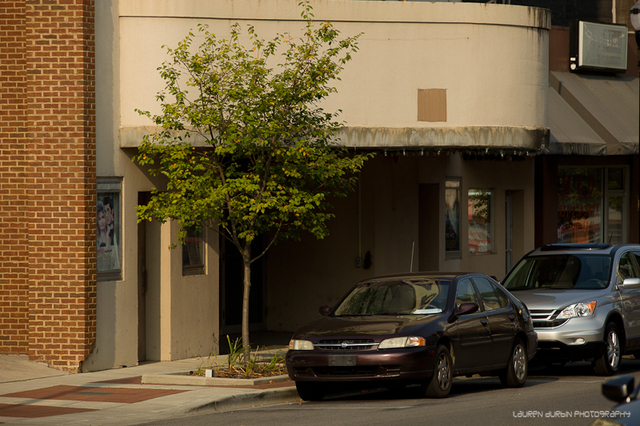 The Park Theater was opened October 18, 1939 by the Cumberland Amusement Co. a subsidiary of the Nashville based Crescent Amusement Co. On September 17, 1947 it suffered a disastrous fire at the stage end of the building. It was renovated and reopened July 18, 1948. It was closed in 1986, and the theater stood vacant for many years. It was reconfigured into offices and suites by a local contractor.

In recent years the Park Theater Group was formed and the City of McMinnville purchased the building with intentions to restore it to its former glory. A $2million restoration began. The Park Theater was reopened May 15, 2015.

Here’s a link to a Nashville Tennessean newspaper article about the Park Theatre in McMinnville. The description sounds interesting, though using the title “movie palace” for this hall seems a little overly generous.

Here is a recent photo of the Park Theater.

Park Theatre, owned by Cumberland Amusement Company and designed by Speight out of Nashville, TN, had its Grand Opening October 18, 1939 at 6:30 PM. The building, which cost $50,000 contained the 1000 seat theatre (265 seats in the balcony, 735 on the main floor), and a resturant on each side. The 1800 visitors opening night seemed to assure success for movies and live events on stage. On September 17, 1947, a fire broke out in the stage area burning three and a half hours. The theatre was restored while adding additional seating and was reopened to another packed house on July 18, 1948. In the mid-50s with the advent of Cinema-Scope, the “House Beautiful”, as the Park was known, was renovated again to add the Cinema-Scope Screen and this downsized the seating back to 1000 seats, which were kept until it closed the second week of September in 1986, the cartoon movie Transformers being the last images on the massive screen. Our Park Theatre Group is currently working to restore the Neo-Classical styled Park Theatre into a multi-purpose facility that retains the best of its heritage while offering a venue for live events as well as classic movies or other on screen efforts.

Great 1984 night photos, I will have to check this place out.

Surely we can do better than a terrible picture of cars in the street out front?