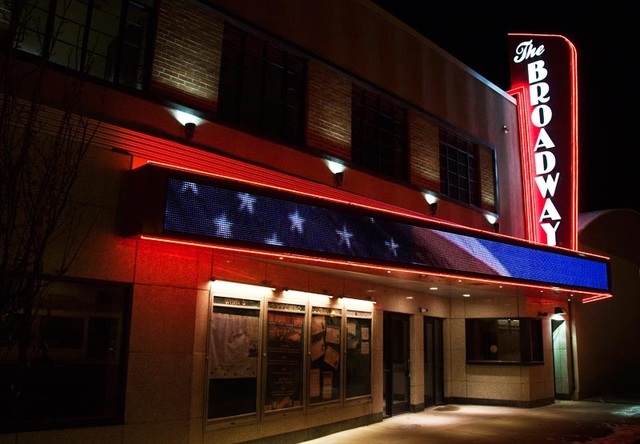 Originally opened as the West Theatre, with 758 seats. In recent years it became the Star Cinema 2. Around 2013, it was renovated to the plans of architectural firm Myers Anderson Architects, and reopened as the Broadway Theater. It is owned and operated by the City of Rock Springs, WY. It is now a 350-seat theater providing live acting and musical entertainment to the Rock Springs community.

RSmuseumgirl; Many thanks for your input & correction. The Grand Theatre now has it’s own dedicated page on Cinema Treasures:
/theaters/20046/

Yes, the Rialto Theatre is listed in editions of F.D.Y. between 1941 and 1950 at least with a seating capacity of 1,125. Operated by Fox Intermountain Theatres in the 1940’s. Address anyone? Please. Then we can add it to C.T.

The last owner of this theater was Movie Palaces, Inc., that owns other theaters in Rock Springs, Green River, Cheyenne, and Casper.

I think the address for this theater and the one for the Star Theatre in Rock Springs may have been reversed. According to this online history for 618 Broadway Street, the theater at that address was built as the West with 758 seats and then became the Rock: View link

In addition, the theater at 618 Broadway is going to be renovated and reopened according to this announcement, which indicates its former name was the Rock and that new facility will given its original name of the West: View link

I am certain that the addresses have been reversed; a search on 591 Broadway Street shows that the premises is the Victory Christian Fellowship church and the church’s website mentions that it was a former theater. The online history cited above indicates that the church could have chosen either the theater at 591 Broadway or the Rock at 618 Broadway and chose the former.

The addresses for this and the Star Theatre in Rock Springs should be corrected. This status of the Star Theater Two should be be Closed/Restoring, and the aka list should include West Theatre.

Area citizens are being invited to vote on what the renovated former Rock Theater should be named when it re-opens: View link

I see the correction has now been made; thanks.

The plans for the renovation of the Rock Theatre were prepared by the firm of Myers Anderson Architects, with offices in Pocatello, Idaho, and Evanston, Wyoming.

1965 and the 1981 photo from American Classic Images dead link above added. As West and Rock Theatre.