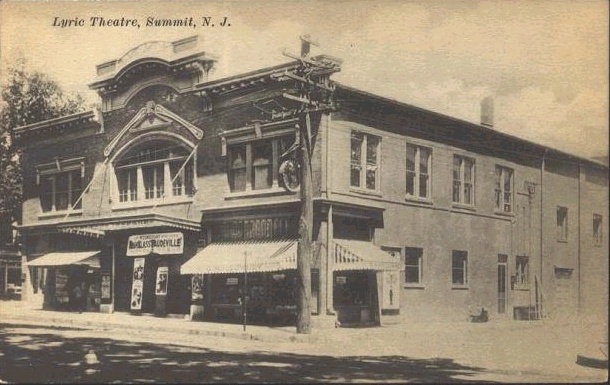 The Lyric’s site is presently a municipal parking lot, at the northeast corner of Beechwood and Bank Street, across from the Beacon Hill Tavern, between Springfield Avenue and Union Place

According to an ad, the curtain rose at the Lyric on August 10, 1914. The opening program included “A Million Bid” as well as “John Bunny and Fiora Finch in a new comedy & other big features.” 15 & 25 cents for the matinee and 25 cents for the evening show with all seats reserved. “It was operated by a Mrs. H.C. Brown and continued to show movies-only until a period in the 1930’s when Broadway plays with New York stars were brought to its stage.” The fire occurred on May 26, 1951, right around the time the theatre was scheduled to close for repairs until the fall. An ad that ran about two weeks before the fire is slightly contradictory: it states that all movies scheduled at the Lyric would begin screening at the Strand (right down the street) on May 24, but lists the Lyric’s closing date as May 27. Unfortunately, the archives are missing a month’s worth of (weekly) issues from that time, so I’m not sure if there were any films or shows scheduled at the time of the fire. I have some screen grabs of advertising and a “Looking Back” recap of the fire from an issue in the 70’s and I’ll post those up shortly. All info from the archives of the Summit Herald.