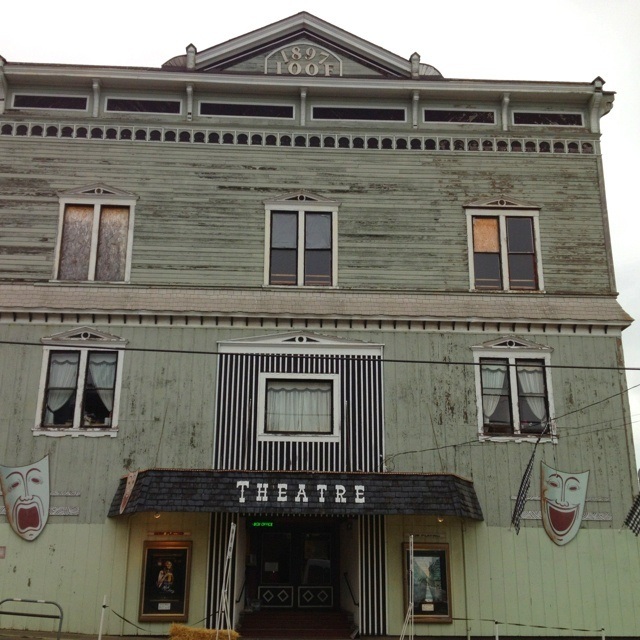 Opened in 1948 with 400 seats, the Uptown Theatre is made entirely of wood and has no ornamentation. There are two marquees which are easily visible.

In recent years, this family owned movie theatre has been updated a little and now participates as one of the venues of the Port Townsend Film Festival.

So, is Port Townsend starved for entertainment?

Originally from Tacoma, I live on California’s Central Coast and am wanting to live closer to my folks' home after almost 30 years. Is this theater for sale?

The Uptown Theatre is a classic example of what fraternal organizations typically did with their buildings. It was constructed in the late 1800s as an Oddfellows lodge. The Oddfellows held their meetings in the top floor, and for a while, used the downstairs floor as a community dance hall. It eventually became a skating rink, and the original hardwood floor is still there. At the time, skating music was provided by an organ, located on a “Romeo and Juliet” balcony.

In 1948, a local family leased the downstairs level and installed a sloped floor over the original hardwood, The organ loft was walled off and a new Century projector and sound system was installed behind the wall. The curved balcony remains today. The projection booth was accessed by going through the dining room of the mid-level apartment, where the theatre’s owners lived for many years.

The theatre does have poster boxes, located on either side of its entrance. They were built for the large 40x60 posters that were common back then.

The theatre has changed little over the years. It was remodeled in the late ‘70s, when it reopened after being closed for 3 years over an admissions tax dispute with the city council.

More recently, the projectors have been upgraded and automated, and stereo sound has been installed.

When the Uptown opened, the owners closed two downtown theaters that they were operating at the time… the Port Townsend Theatre and the Rose. The Rose is now reopened under separate ownership.

The Uptown’s owner purchased the building from the Oddfellows in the mid ‘90s. Currently, a dance teacher and aerobics instructor operates in the remodeled lodge meeting rooms upstairs.

The Uptown Theatre owners also own and operate the Wheel-In Motor Movie, the area’s only drive-in theatre, which was built by the family in 1952.

Thanks for finding the address, Lost!

the theater stands at the corner of Lawrence and Polk, in the uptown business district (the P street address is a private home in a residential area).
And the theater is alive and doing quite well!

The address is 1120 Lawrence Street.