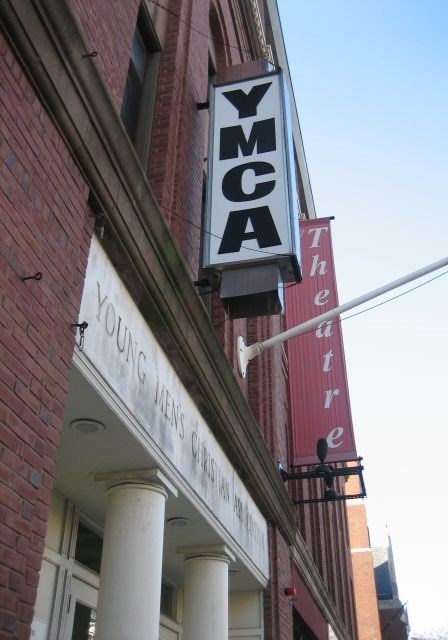 Durrell Hall opened in 1897, located in the YMCA Building on Massachusetts Avenue in Cambridge. It was operating in 1927 and still open in 1941. It had a very imposing entrance in the middle of a large building block.

The theatre was restored and reopened for live theater in December 2002.

The 1927 Film Daily Yearbook lists Durrell Hall as having 600 seats and operating 6 days per week. The MGM Theatre Photograph and Report form has a photo taken in April 1941. The entrance is in an imposing building. There is an ornate, shallow canopy over 3 sets of double doors, with half-round poster boards on either side, similar to those at the Colonial Theatre in Boston. The address is Main Street, with no number. The Report states that it is not showing MGM product, that it was built in 1900, that it is in Fair condition, has 600 seats, and recives patronage from a YMCA. The competiting theatres are the Central Square and the Olympia.

The article says that one part of the 2002 restoration was to “tear out the balcony projection booth”. So it probably won’t ever show movies again.

Here is another photo of the YMCA building. Does it look similar to the 1941 photo in the MGM report?

The “Main Street” address now just sounds wrong. Maybe it was correct in 1897, but certainly not in 1941. But thanks for bringing this place to our attention; I had no idea that it had once shown movies.

Lost Memory- the 1910 photo in the article you posted is almost surely the same building which is photographed head-on and close-up in the MGM Report.

Ron Newman- the drawing in your report appears to be a somewhat modernized version of the same building. There was a ornate and rather shallow canopy over the doors (just under the vertical YMCA sign in your drawing). A little of the detail just above and around the doors has been removed in the drawing. Compare your drawing with the 1910 photo posted by Lost Memory. It’s almost certainly the same building.

I’ve sent in a Correction; hopefully one of the site owners will get to it shortly.

The corrections at the top of the page look great. Thank you, Ron Newman and Lost Memory. When I noticed this antique cinema in the 1941 MGM Reports I had no idea it was still around.

In a short clip recently posted on Youtube by the Univ. of Arizona, one Frank Cullen, who grew up in Cambridge, says that there was a movie theater called the Durrell which was upstairs in the Cambridge YMCA which he frequently patronized at a cost of 6 cents per ticket. He learned that many of the film performers had backgrounds in Vaudeville. This started a life-long interest in the Vaudeville era and the amassing of a huge collection which he has now donated to the Univ. of Arizona.

A current college publication mentions the “hoots” (folk music concerts) presented at this theater by the Mama Bird Recording Co., but they give the seating capacity as “220” seats. It’s a fairly busy venue.

In the entertainment pages of today’s Boston Herald there is an ad for a play “Glass House” at this theater Feb.18-26. The theater name is listed as “Durrell Theatre (YMCA Cambridge) 820 Massachusetts Avenue”. So the Durrell name is still being used.

Durrell Hall in Cambridge is on a long list of theaters and halls receiving licenses in Massachusetts for the year ending Oct. 31, 1914. Carroll Chase was the Mgr. and the condition was Good. The link to the list was posted by Ed Findlay on the page for the Boulevard Theatre in Revere.