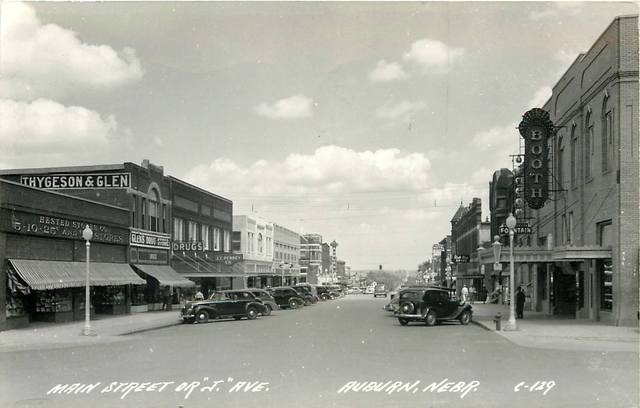 The this theater is now owned by the Auburn school district which continues to operate it as a commercial theater, recently raising $80,000 to help pay for upgrades. View link

I just added a mid `30’s photo of the Booth Theater, which is the same building the current State Theater is in. Booth Theater should be added as the previous name to the State’s Overview.

Robert R. Booth had a group of small-town silent theaters in the late 1910s. Auburn was home to theaters including the Booth, the Bennett Theatre run by Ole Bennett, the Rex/former Opera House, and the Auburn. The Auburn and Booth made it into the sound era with the others not making the transition.

On July 3, 1929, Robert Booth moved the Booth to its new and current location with a grand reopening as the New Booth Theatre. Wes W. Booth took over the theater in 1934. It had been renamed the Booth Theatre.

On June 24, 1939, the Booth Brothers sold three of their venues (Booth Theaters in Auburn and Nebraska City and Paramount in Nebraska City) to the Griffith Theatre Circuit took over the location, the gave the Booth Theatre a streamline moderne makeover complete with a blue porcelain sign with neon tubing spelling, “State.” That was the theater’s new name as of January 1, 1941. The Auburn Theatre was also purchased by the Griffith Circuit and appears to have continued operating into the late 1950s.

The State Theatre made the conversion to digital after some community support and was still in operation in the 2020s after 90 years in the same location.

“Work is progressing rapidly on the new Masonic temple at Auburn, Neb., the lower floor of which will be operated by the Booth Bros, of Nebraska City. It is rumored the Booths contemplate a chain for that section of the state.”