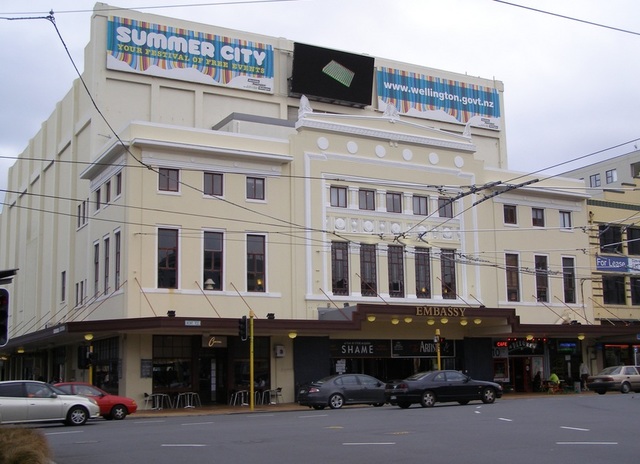 Opened October 31, 1924 as the 1,749-seat Deluxe Theatre, the Embassy Theatre is believed to have one of the largest screens in the Southern Hemisphere. Its exterior is stripped classical, and the interior is classic Greek Revival hardtop. The lobbies are mosaic floor, and the theatre contains a Sicilian white marble staircase, blue tiled walls, and bronze fittings.

The original screen and proscenium is hidden but preserved behind an enormous 70mm screen and proscenium installed in 1960. The downstairs is closed but not damaged, reducing seating to 852. Renovation revealed original paintings hidden behind 1960’s false ceiling. Work was completed on 19th December 2001 for the premiere of Peter Jackson’s “Lord of the Rings”. The main original aiditorium is named The Grand. Two small screens named Cinema de Luxe have been created at ground level in the Black Sparrow Bar.

A recent exterior photograph of the Embassy Theatre with a “Lord of the Rings” ‘extra’:
View link

Now operated by Sky City Cinemas, still only one screen.

Just to correct the info given above, the 70mm screen and proscenium was installed in 1960 not 1965.
The first 70mm film shown was “Porgy and Bess”.

Several rows in the stalls were used when 70mm was installed.You had to strain your neck and eventually they closed the stalls.I did sit there once but never again.The theatre manager’s brother was an actor in the fifties. It was truly the only place to see 70mm. The nearby Kings also had a fantastic 70mm screen ,only 2 feet smaller than the Embassy.The Embassy had the largest 70mm screen in Australia.Nothing in Australia or New Zealand matched the awesome screen as far as 70mm went.Australian 70mm screens were always small. I also worked at the State(later called Cinerama),Plaza,Kings,Tudor(later called Lido). as well as the Paramount. (as did my parents).As a child I remember cinemascope being installed at The Kings and seeing 3D at the Tudor.

Meant to say the largest 70mm screen in Australasia ,not Australia

The 70ml screen was originally to go into the Majestic but the theatre owners would not allow the radical alterations needed to install it. When put in the Embassy the screen was so large that the sight lines were so bad that they couldnt use the downstairs seating as the overhang of the balcony cut out half the screen.They could only use the balcony seating of about 800. This caused programming problems as big films like James Bond had a minimum seating requirement of not less than 1000. Thus the big screen could not be used for a lot of the blockbusters that it was intended to be used for.

You are both wrong ABCDE and Robert. The stalls were used when 70mm was installed but only for a very short time.I saw all of the 70mm films shown there until 1967.