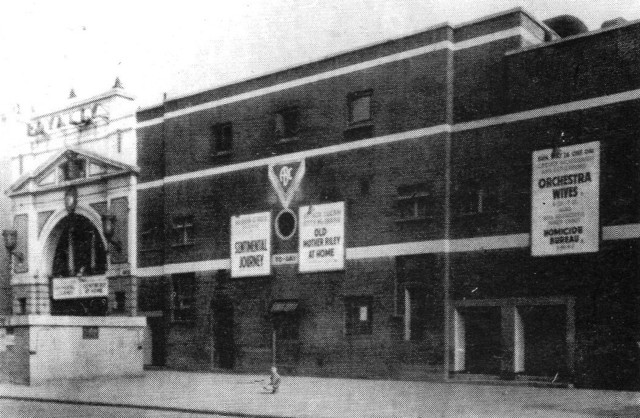 The Royalty Cinema opened on 4th February 1929 and was built for W.C. Dawes' Modern Cinemas, a small circuit of independent cinemas in west London. Here the location was close to Ladbroke Grove underground station on the borders of Notting Hill and North Kensington.

Noted cinema architect J. Stanley Beard designed a functional cine/variety building typical of the period. The entrance on the left hand side had an arched opening, topped by a pediment and was faced in white stone. The auditorium ran parallel to the street to the right of the entrance.

It was taken over by John Maxwell’s Associated British Cinemas (ABC) chain from 19th February 1935 and was operated by that circuit for the remainder of its life.

It was closed on 19th November 1960 with George Sanders in “Village of the Damned” and Derek Bond in “The Hand”. It lay empty and unused for several years until it re-opened as a bingo club from 14th April 1965. Later demolished, an office building known as Royalty Studios was errected on the site.

The Royalty Cinema was equipped with a Compton 2Manual/5Rank theatre organ.

Saw Bebe danials and Ben Lyon there…I was in awe…