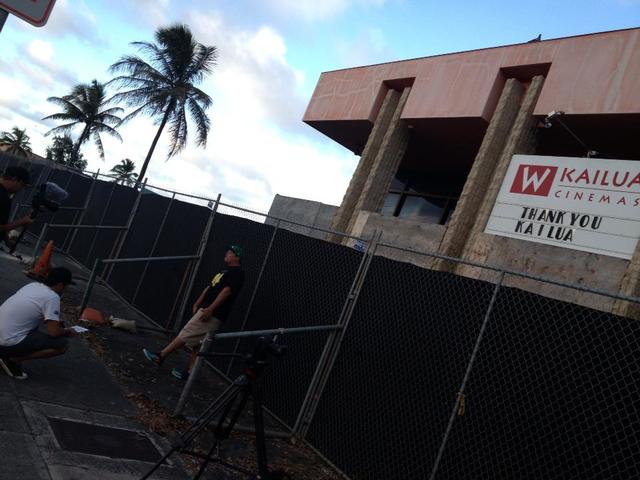 Opened in December 1972 as a single screen Holiday Mart Theater. Later converted into two screens and renamed the Kailua Cinemas, it was operated by Wallace Theaters. Closed March 18, 2004 with “Catch That Kid” & “Big Bounce”.

Kailua will lose its last movie theater at the end of the month when the Keolu Center Cinemas close down.

Hollywood Theaters made the decision last year that it would close the four-screen theater at the Keolu Shopping Center when the lease expired on April 30.

It will be the company’s third theater in Kailua to close. Portland, Ore.-based Hollywood Theaters closed the three-screen Enchanted Lake Cinemas in the Enchanted Lake Shopping Center in 2003, and the

This theater actually opened back in the 1970’s. It was originally called the Holiday Mart Theater with just one screen. During the early 90’s it was taken over by the Wallace Theater chain and turned into twin screen venue.

Question for anyone: was this one of the original Jerry Lewis Cinemas that was on Oahu? One was in Kailua and later was bought by Holiday. I know this place as the Holiday Mart theater, so I would assume they are one and the same. Will have to look into finding movie showings from the early 70’s to be sure.

When this theatre opened in 1972 it was running 16mm features that they were getting from In Flight. At some point they would have had to convert to 35mm as In Flight shut down 16mm on aircraft for video cassettes. I left Hawaii in June 1973 so not sure when this conversion would have taken place.

As a former manager of the Kailua Theater, let me clarify the issue about the number of screens at the theater. During my management term (1997-1998), I researched the history of the theater. It started as a single-screen neighborhood theater, and later, a long wall was constructed down the center of the auditorium. It divided the auditorium into two sections, two screening auditoriums. The wall extended from the entrance into the auditoriums to the end of the building (behind the screens). This is when the theater became a two-screen theater. It never had four screens. The theater opened as the Holiday (Mart) Kailua Theatre in December of 1972.