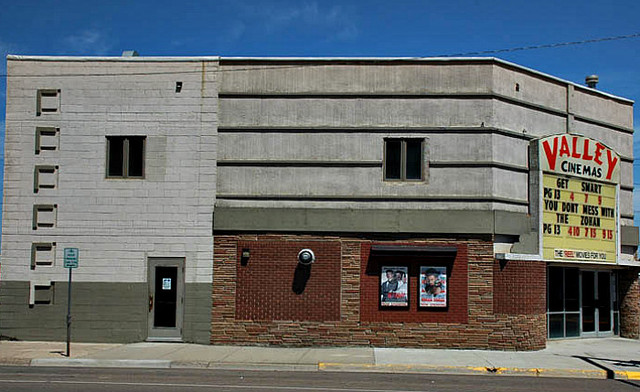 The Valley Cinema opened as a single screen and was twinned by Polson Theatres. Seating is listed at 426. The theatre features first run attractions.

The August 27, 1979, issue of Boxoffice has a letter from Peyton Terry, owner of the Survant Theatre, Glasgow, Montana. He must have renamed the house after himself some time after that. A Roxy Theatre in Glasgow, destroyed by fire in November, 1952, was replaced by a house called the Survant Theatre, the opening of which was reported in Boxoffice of January 30, 1954. The description of the new house says that the front had facing of Arizona flagstone, which the photos linked above show Valley Cinemas building has.

The Survant featured a “south seas” motif, the article said, beginning with a floral pattern on the sidewalk at the entrance. The first photo Chuck linked to shows that the decorative sidewalk has been replaced by ordinary concrete. The lobby and auditorium of the Survant were decorated with hand-painted murals by San Francisco artist Homer Sterios. Construction was by the Harvey Theatre Construction Company, a California firm, and the theater was designed by San Francisco architect Bernard Nobler.

Bernard G. Nobler died in 2003, and an obituary referred to him as an architect who had designed theaters and other buildings in California and Hawaii. Though the Boxoffice item also refers to him as a theater architect I’ve been unable to find out much about his work. The only other Boxoffice references to him are for his unfortunate 1970 remodeling of the Empire Theatre in San Francisco, his position as local associate to architect Henry Greene in the 1968 twinning of the St. Francis Theatre in the same city, and a project for a twin theater that was planned for a site on Ventura Boulevard in North Hollywood as long ago as 1948, but which was apparently never built.

I’ve found Internet references to several of his non-theater projects, including the Tahoe Biltmore resort and casino of 1946, which was originally owned by the Blumenfelds, operators of the San Francisco-based theater chain, though the resort apparently didn’t have a theater in it. But given the association with the Blumenfelds, it seems possible that Nobler designed some of the theaters for that chain, most of which so far remain unattributed at Cinema Treasures.

The original Survant Theater had a crying room at the back left (as you sat in the theater). This room had its own sound and you watched through a double-pane window. This was a place for mothers to watch with a crying baby. To clarify, after the Roxy burned,no theater was built at the Roxy’s location (close to the Smith Clinic building). The original Survant was located on the same street but a block west..as I recall. When the Survant opened, the cost to a 12 year old was 50 cents. My dad wanted us to boycott the theater because the cost at the Orpheum was something like 12 cents. We just paid the 50 cents.

I was a six year-old kid in Glasgow when the Roxy burned. I remember watching the fire from my bike, wondering how I’d ever know what became of Commando Cody after last week’s cliffhanger… Two years later, the new Survant Theatre introduced Cinemascope, Hollywood’s answer to television (still a distant dream in 1955’s Glasgow…) The first film to be shown was “A Man Called Peter,” which I watched for about 5 minutes before walking out, not wanting to waste the experience on this talkathon… The next week’s feature wasn’t in Cinemascope (or 3-D), 1953’s “Inferno” with Robert Ryan, but ironic considering the Survant arose from the actual inferno down the street when the Roxy burned… Not long after that came “Bad Day At Black Rock,” with, of course Spencer Tracy and Robert Ryan, maybe the best Cinemascope picture ever…

And Commando Cody was back! He escaped after all! (Whew!)