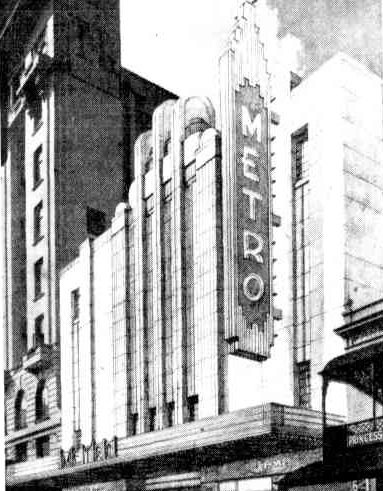 Known as ‘The Theatre of the Stars’ and built for Loew’s Inc., the Metro Theatre was a dazzling Art Deco style cinema, seating some 1,411 patrons. The Metro Theatre opened on November 10, 1937 with “After the Thin Man” with William Powell and Myrna Loy. The entrance to the theatre was ‘resplendent in polished red granite and chromium metal’. The outer foyer had gray marble walls, picked out with stripes of darker shades. There were 804 chairs in the stalls and 607 in the lounge/circle. The lounge and foyers were tastefully decorated with soft lights and furnished with comfortable sofas. Mirrors framed with drapes added an air of spaciousness to these areas.

The auditorium was of a parabolic or a saucer-shaped design, gently sloping towards the centre, both upstairs and downstairs, to give patrons better sight-lines and hearing conditions. The screen was a modern English white rubber screen, perforated all over with tiny holes to give better effect and let the sound through from the six speakers mounted behind. There were three projectors, two for running the film and one in reserve in case of a breakdown. This was a familiar trait at all Metro theatres around Australia.

In 1973, the theatre shed its picture palace facade and was given a new one with pointed ‘cubes’. It became a triple cinema known as the Albert Cinemas. Now operated by Greater Union Cinemas, it was reopened on December 19, 1973 with Edward Fox in “Day of the Jackal”, plus a puppet show, fashion parade and musical entertainment, which preceded a parade down the main street of Brisbane. On entering the theatre, 4,000 balloons were released from the awning, spilling onto the crowds below. Unfortunately, the celebrations were short lived, as the Albert Cinemas were affected by the floods in January 1974, and Cinema 3 in particular was badly damaged. Eventually it was cleaned up and re-opened.

It was last known as Greater Union Brisbane City Cinemas and closed in 2001. It was demolished in October/November 2004.

As of this week (Mon October 25) demolition due to begin on this building. This was reported in local weekend papers.

As you can see from other comments , this once superb theatre was a mere shadow of it’s former self. The only trace of it’s days as the Metro Theatre (prior to the 1972 multiplex conversion) was in the lane way behind the theatre …where a painted sign clearly said Metro Theatre Engine Room. Luckily I took a photo of this about six months back. Also lucky to come upon a copy (photocopy) of the opening magazine issued upon the opening in the 30’s.

Wish I had some more detailed colour photo’s , not sure how many shots were taken inside pre 72 when Greater Union purchased the theatre from MGM…and tri-plexed it…then covered up the art deco facade with a false 70’s facade.

It was here in Brisbane “Gone With The Wind” screened first time around.

It is to be replaced by an 8 storey building.

I have in my possession a bronze plaque of Marcus Loew founder of Loew’s Corporation which was situated in the lower foyer of the Brisbane Metro until removed by MGM Australia in the late 60’s as they then decided that as MGM and Loews had long sinced devolved into separate companies the plaque was no longer appropriate.
I wonder if any other members have such a plaque as I imagine they were probably placed in all the Loews Theatres in the 20’s and 30’s.

Status should be changed from “Open” to “Closed/Demolished.”

Further details and photos can be seen here>>> http://www.cinematour.com/tour.php?db=au&id=30

In regards to the above link , those interior shots are actually of The Forum , not the Alberts. The Forum was a mid 60’s cinema , twinned in the early 80’s and closed at the same time as the Alberts.
It was gutted inside and is now a Border’s Books. As for the the Alberts/Metro it is a boarded up vacant lot with remants of bricks etc. The new development has not gone ahead as yet.

Does anyone have any good interior shots of The Brisbane Metro pre tri-plexing??

As for its Adelaide cousin , I was in Adelaide for a month late last year and it was still in tact , including the art deco facade…just looking abandaned and boarded up.

My late father was General Manager of the Metro from about 1965 – 1975. He always had so many stories to tell from his time at the Theatre. Showing MGM and Disney movies it was an extremely successful cinema. He was so proud of it. For someone to tell those stories some 30 years on and still get excited about it gives you true insight into what a special place the Metro was. The Metro will be in my father’s heart forever. We will also continue to share the memories.

Further to my e-mail above, my father’s name was George Anastas and he will live in our hearts forever.

Hi M Anastas,
I worked with your Father, George when he was the Manager at the Metro…where I was a projectionist… and after the Metro closed, I again worked with him at the Cinema George where I was a projectionist there also. Cec Walburn at the Metro and Hec White at the Cinema George were also in the bio box at the time.
Your Dad used to give me parcels and the keys to his little two door Fiat to take parcels over to Bowen Hills among other places.
I really enjoyed the company of your Father….we was more like a good friend than my boss. I respected him greatly as did many other work colleagues.
My Dad worked as a projectionist at the Metro in the 40’s and my Mum worked across the road at the St James as an usherette.
They met and as you can see, I am the result.
If you have any old photos, I’d love to see them. My Mum and Dad both in their 80’s are still going strong and I am sure would also like the memories.
My email is .au
Bye for now and very best regards
Brad

Just logged on to this site and was very sad to learn of the death of George Anastas. I was treasurer and then assistant manager with George at the old Metro 1967-1972 when it was sold to Greater Union.
After I left it was wrecked by the new owners and it seems that travesty has now been demolished.
I have very fond memories of George, we used to get on really well together and had many laughs.
I am really sorry he is gone and I will not have the opportunity of meeting up with him if I ever visit Brisbane again.

Paul Lewis.
p.s. don’t remember you Brad, must have been after I left.

I worked at the Metro from 1969 – 1973 from memory. Mrs Ethel Hinds was the manager of the candy bar and my neighbour and I started working in school holidays. I remember Mr Anatas, he was really nice and I suppose my first boss. I remember stories of a ghost in the Lounge. It was suppose to be a man who died while the building was being constructed. I remember a gentlemen named Lloyd who sold candy from the tray during interval.

Never new any of the Projectionists though.