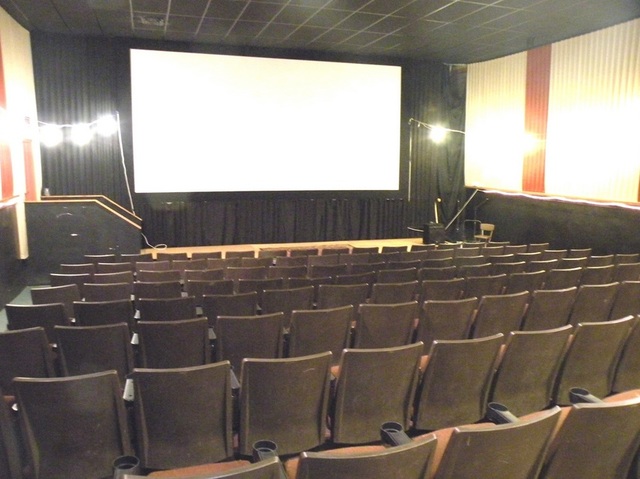 The Roxy Theatre opened on July 14, 1935 with Al Jolson in “Go Into Your Dance”. It last operated as a twin as a second-run movie house. In February 2012 as a live music venue name Roxy Club, but this was a short lived venture.

I’m the current manager of the Roxy Twin. We are now a 2nd run theater, with $3.00 tickets. Our website, www.roxytwin.com, is functional and very useful.

Does anyone have information on a Liberty Theatre in Hamilton? It was under construction when mentioned in the trade journal Brick and Clay Record, issue of December 13, 1921. The side walls of the new theater were being built of brick salvaged from the town’s Rivoli Hotel, which had burned two years earlier.

The Roxy’s building looks about old enough to have been the Liberty, and Hamilton is quite a small town and might never have supported two theaters. Perhaps Liberty is an aka? A theater predating the original Roxy in New York would certainly have opened with a different name.

CinemaTour lists five theaters in Hamilton: the Roxy and Pharaohplex, plus the Liberty Theatre and a Starlite Drive-In, neither with an address, and a Rio Theatre at 172 S. Second Street. Maybe the Liberty became the Rio. The building at that address now has 1996 on its pediment, though, so the Rio is demolished.

Joe, I don’t think the Liberty became the Roxy. The Roxy is listed as opening in 1937 and both theatres were listed as operating thru at least 1958 at the same time. The address listed for the Liberty Theatre was 127 W. Main St. The Roxy Theatre is open showing current movies, it has made conversion to digital.

The Roxy opened July 14, 1935 with Al Jolson in “Go Into Your Dance.” The theatre was twinned. It closed and was briefly reopened in January and February of 2012 as the Roxy Club, a live venue. It was offered for sale for $185,000 and from the real estate ads was significantly altered for its next use.