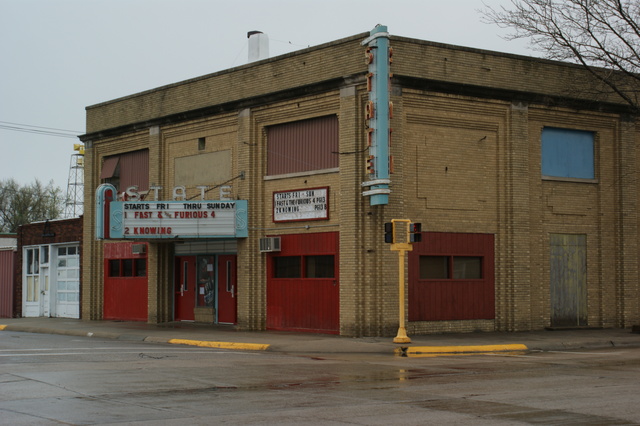 Opened in 1916 as the 500-seat Martha Ellen Auditorium and named after the daughter of Colonel William Shelton. The Martha Ellen Auditorium presented live performances and vaudeville. In March 1930 it was renamed the State Theater and switched to motion pictures. The main floor has been updated with new seating but the balcony is pretty much the original, (the stairs, balcony rails, and seats).

The State Theater was converted into two screens with the balcony operating as a small second screen. It was showing first run attractions at reasonable prices, but had been closed by late-2014. By 2017 it had reopened screening movies at weekends. The State Theater has been listed on the National Register of Historic Places since 1988 #88000944. In 2019 only the main floor screen is operating, the small balcony screen is closed.

Here is another photo:
http://tinyurl.com/yj5hw2r

Boy! I hope they have painted that building.

The State Theatre is permanently closed.

“Another forceful and attractive organ is issued by C. F. Marquis, owner of the Martha-Ellen Auditorium. Central City, Neb. The organ is called the Martha-Ellen Screen Magazine, and one glance proves its claim to being a miniature ‘magazine.’

“The work has twelve pages, with cover, and is filled throughout with up-to-the-minute news and comments on late productions, together with the usual calendar of coming stars and their plays. In the issue of August 27 Mr. Marquis devotes the entire front cover to an elaborate announcement of Mae Marsh’s appearance in ‘The Cinderella Man,’ one of Goldwyn’s successful first-year releases. Cuts of other Goldwyn stars and advance notices of their coming productions are arranged prominently throughout the magazine.

“Free tickets of admission to those who discover a word spelled backwards, is featured as a circulation booster.”The hyphenated version of the theater’s name was apparently used in its early years, as the same form appears in Motography of July 14, 1917, which said that L.J. Cooper had taken over management of the house and would operate it as a moving picture theater. Also, the author of the MPW item describing the magazine presumably had a copy and was taking the name, complete with hyphen, from the masthead.

Another interesting item I came across provides evidence that the 1916 building was not the first hall of this name. A 1908 publication by the Nebraska Society of Friends (Quakers) said that a meeting had been held in the Martha-Ellen Auditorium in Central City.

There is currently a group trying to put together a non profit to restore this theatre.

The State is currently showing movies on Friday, Saturday, and Sunday, but nothing is yet announced for September. Five dollar admission, four for children and seniors. They are showing Dunkirk next weekend. Quite a bargain. But so far there is only one showing each night (at 7:30), so don’t be late.

I had the opportunity to go visit the State this weekend and enjoyed myself quite a bit. I showed up about an 45 minutes early and gave the nice folks there my story about how I was interested in touring around my part of the country looking for the small town, one screen theaters. After hearing that I was treated to a history of the theater, a tour of the building, and some things they’ve got in mind for the future. It was all unexpected and very cool of them to do. Thanks again!

p.s. sorry for the lens flare on a few of the pictures; I must’ve dragged my hand across the lens at some point in my haste to not miss a thing.

The State opened with Jack Oakie in “Street Girl” in March of 1930.