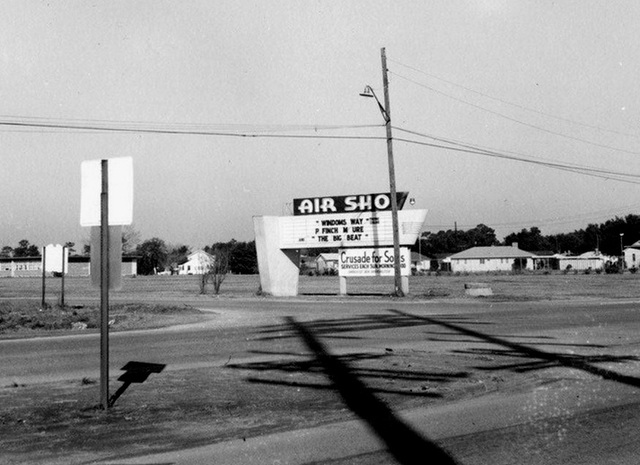 This drive-in was located near the local airport in the Chickasaw district of Mobile, AL. It was opened prior to 1955 when it was operated by Giddens & Rester Theatres and W.E. Limroth. One native recalls planes landing directly behind the theater, presumably allowing the passengers and crew to watch the show for free.

Another thing that bugs me is the photo. It appears to have been taken in 1958 (“Windom’s Way” was released in ‘57, but “The Big Beat” was '58). It is taken from SW of the drive-in entrance on the opposite side of the road looking NE. It has to be since we see a road next to the marquee and nothing like that existed on the south side of the street.

Yet, the houses appear to be too close and the building on the left does not appear in the 1952 or 1967 aerial photo or any topo map from the time. If you use Google Street View, the houses are considerably further back and that building has never existed anywhere near that location.

Also, you can see the shadow of the power poles on the street, yet no pole was located in that spot, it was considerably further to the west. Not to mention that no photo shows telephone poles and lines on the north side of the street.

I do not believe what we see in the photo matches the area around the entrance of the drive-in. So, either the photo is from a different “Air Sho” or the drive-in on Chieftain Way is not the “Air Sho”.

Excellent photo-forensics Kenmore! I would also add that it appears the street in the foreground has a median whereas Chieftain Way is two lane – and I don’t see any signs that it was ever anything but two lane. So, is this a different Air-Sho in some other city? Intriguing…

Referencing Kenmore’s comment: I don’t remember exactly what the sign looked like, but I think it was similar. I do remember that the drive-in there in Chickasaw was named The Air Show. The shadows of the power poles would agree with the existence of the high power lines, and, since this looks nothing like the entrance to the theater should have looked, I wonder if this sign was up on the intersection of Chieftain and Craft Highway. For what it’s worth, there is a raised manhole on that corner similar to the one in the picture here. This would mean that the building on the left is the school that is there now, since it bears a resemblance to Kate Shepherd and and E.R. Dickson before they were modernized. On some aerial photographs it shows that Craft Highway did have a median, and the houses on the right would have been on Chickasaw Circle.

Just uploaded an aerial picture from 1960. I don’t know what the driveway was paved with; in those days a lot of oyster and clam shell were used in this area (even the asphalt had oyster shell instead of gravel), and that would bleach out “white” in the sun. As you can see, the driveway into the theater itself can’t look like the picture of the marquee. If you look at the far right side of the aerial pic, I tried to be sure to include the suspicious shadow at the corner of Chieftain and Craft Highway. It’s been too long, and I just don’t remember if this was where the sign is or not, but I THINK it was. Chieftain was more or less a residential road, and would not have had much traffic, but Craft Highway/Highway 43 was the north end of Wilson Avenue, the main street through the heart of Prichard connecting that city with Chickasaw and points north. It looks as if religious services could have been held there on Sundays. I have heard of sermons being given from the top of concession stands.

After looking at the corner of Craft and Chieftain which is to the east of the drive-in, that is considerably closer to matching the photo assuming it was taken on the SE corner of the intersection looking NW. It also makes considerable sense to stick the marquee at that intersection as opposed to the entrance of the theater.

It’s close enough for me to say that it is the same and I apologize for not considering that possibility when looking at the photo. The area has changed considerably with a tire store (converted strip mall it appears) on the corner. The building on the left could be the high school and the raised manhole cover looks nearly the same, albeit changed over time.

What clinched it for me was the single-story house seen just to the right of the marquee with the chimney. That house, although changed somewhat, still exists and you can see it on Google Street View. The two-story house to the left has changed quite a bit and almost threw me, but again, I apologize for not taking another location into consideration when looking at the photo.

From looking at the Topo maps and 1952 aerial photo, the land behind the drive-in was a golf course during and after World War II that appears to have been razed for residential dwellings around 1952 that never came about. Today, it’s still mostly an open field which does offer a track.

If it ever was an airfield, it sported an awfully short runway. There is a creek that cuts the field practically in half and would not make for a pleasant landing.

It would be helpful to know the opening date of the drive-in, which does seem well established in 1952. That would help in understanding the origin of the name “Air Sho” and whether it had anything to do with an airfield that seemingly was gone long before the drive-in came about.

From al.com, written by Kelly Kazek

“In 1948 a New Jersey man, a former Navy pilot, had the idea to open a fly-n theater. Ed Brown’s Drive-In Theater opened in Asbury Park, offering parking space for 500 cars and 25 planes. The planes would fly in and taxi to speakers in a manner similar to the cars. In the 1950s, the Air-Sho Fly-In opened in Mobile, according to driveintheater.com. It was one of only five ever built.”

While the Auto Show and Bama were much closer, occasionally something my mother wanted to see (my father hated all theaters) would be at The Do or The Air Show, so I did go there in the ‘60s. I never heard of airplanes flying into it. I just don’t see how they could. Maybe they took the name and everything got all confused.

I’m going to take a guess and say they changed the name to Chieftain Way to 12th Ave when the high school was put there. The high school mascot being the Chieftains; furthermore, the high school is located right next to where the driver in would be. I know someone who lived in Chickasaw in the 70s and went to Vigor in Prichard because Chickasaw didn’t have a high school. So, some time after the 70s maybe is when it would have been changed to Chieftain Way. My guess about it named Air Sho is because of Brookley AirBase in Mobile (further down the road). Brookley closed in 1968.

Yet there are stories that airplanes landed behind the theater. I’m not seeing how given the terrain even dating back to WWII. So, there is some information that is missing.