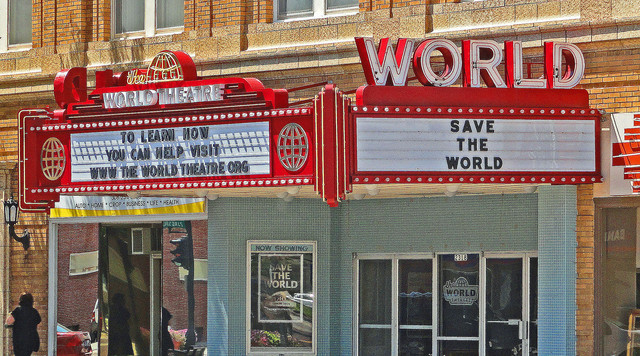 The World Theatre was opened November 14, 1927 and was originally a single screen theatre with 982 seats. It was twinned on April 25, 1983 and was operated by CEC Theatres. The World 2 Theatre was playing first run attractions.

It was closed in June 2008. In early-2012 it was renovated to the plans of San Diego based architectural firm Lahaina Architects and reopened in summer of 2012.

From 2010 photos of the World Theatre in Kearney. [Please click thumbnails for larger view].

A photo I took back in Nov of 2007. View link .. And GOOD News! The WORLD Theatre is being renovated to be Re-Opened! Go here to learn more.. www.theworldtheatre.org/ …
RAC Photography

Chuck1231. Correction on the Link.. The World Theatre website shows to be opening June of 2012.. Great news!!

Arcadia Publishing Company has an entire book devoted to the World Theatre, part of its “Images of America” series.

The World opened on November 14, 1927. The opening program included vaudeville acts, the feature film Adam and Evil, and an Our Gang comedy short. There was also music from the theater’s Marr & Colton organ. The theater was designed by architect James T. Allen, who had designed the Roseland Theatre in Omaha a few years earlier.

The recent renovation of the World Theatre was designed by architect Philip Cudaback of Lahaina Architects.

At one time Kearney, Nebraska had not one but two theaters in town. Unfortunately only one is currently showing films. The World Theatre opened in 1930 but closed in 2008. A not-for-profit group has reopened it for weekend screenings of select films. I like the clever theme for their fundraising campaign, “Save The World.”