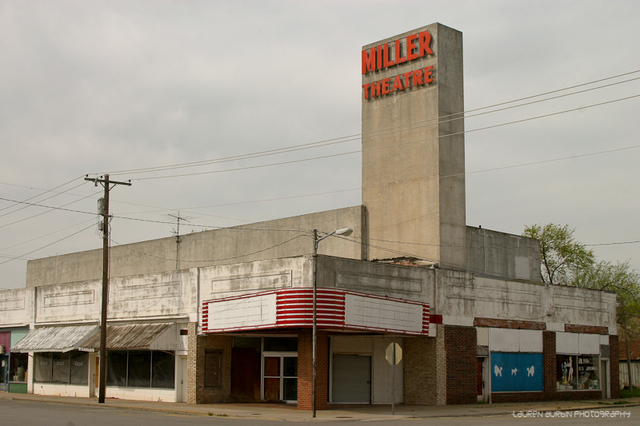 The Miller Theatre was opened in May 1947. This theater is in disrepair and appears headed for demolition.

a 1999 photo of the Miller Theater in Anadarko.

Nice link with color photos of the Miller. Unfortunately this cinema is now falling to ruin -
View link

Anadarko’s four movie theaters were sold to new operators in 1950. An article about the sale in the February 7 issue of the Anadarko Daily News said that Maurice DeFord had opened the Miller Theatre in May, 1947. The rival Redskin Theatre had been opened February 12 that same year by the Hodges family, operators of the Columbia and Moore Theatres. The Hodges family had also operated the Broadway Theatre, which they closed around the time they opened the Redskin.

The Miller Theatre is at the southwest corner of W. Main and NW 2nd Street. Here is Google Street View.

The Miller was described as a 780-seat theatre in its for-lease display ad in the Sept. 18, 1948 issue of Boxoffice.