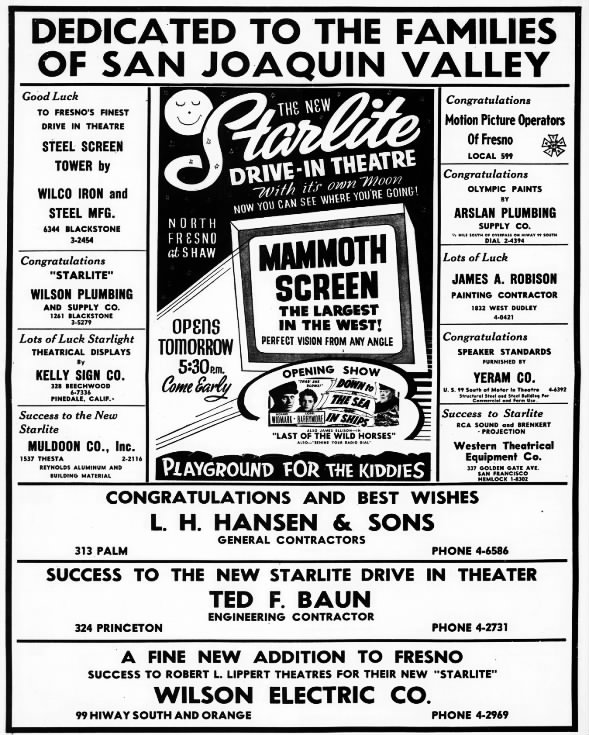 The address is correct, so I’d guess that the 1953 “opening” was for its second screen.

Boxoffice, April 2, 1949: “FRESNO, CALIF. – The $110,000 Starlite Drive-In, being constructed on North Fresno street between Gettysburg and Shaw avenues here, is scheduled to open between May 1 and May 15. Built on an eight-acre site with space for approximately 600 cars, the Starlite is a Robert L. Lippert Co. project”

Boxoffice, July 4, 1953: “FRESNO, CALIF. – The new Starlite Drive-In Theatre was opened recently at Fresno and Shaw avenues, claiming to be the largest ozoner on the west coast. It has two screens visible from any location, has spaces for 1,500 cars, and features first run pictures. The Starlite twin-view airer is a Robert L. Lippert project. It has two boxoffices and two entrance roads.”

1972 aerial uploaded here. notice the new mall next to the drive-in!

in the 1981 topo maps it still lists a drive-in theater where the starlite was. very very weird.

The Star-Lite Drive-In was closed in 1978 and demolished to make way for a shopping center. Prior to the closing, Boxoffice of January 2, 1978 published this article (upper right) about Pacific’s plans to build the four-screen Woodward Park Drive-In to replace the Star-Lite.

This was a Robert Lippert theater in the early 1960s. At that time it was called the Starlite Motor-In.

It was operated by Pacific Theatres.

The Starlite Drive-In was also known as the Starlite North & South Drive-In. It was located at 4888 North Fresno Street, Fresno, CA 93726. The car capacity was 586 cars.