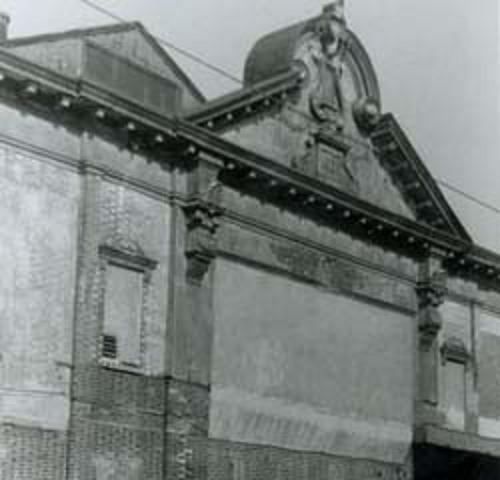 The Yokum Theatre began as a nickelodeon. It was renamed Lincoln Theatre reopening on February 14, 1911 as a movie and vaudeville house. Following a redo in 1924 it was renamed Doris Theatre. It was a typical neighborhood movie house. In 1939 it was remodeled to the plans of architect David Supowitz. From May 27, 1942 it was operated by the A.M. Ellis Theaters Co. chain. I recall going there in the 1940’s and during that time it was segregated.

The Doris Theatre was closed by A.M. Ellis Theaters Co. on May 25, 1950 with William Holden in “Dear Wife”. The vacant building was sold in 1952 and became a truck garage.

LM, I think you’re right. The odds would be against two similar-names theaters a block and a half apart. The blocks in the urban areas of Philadelphia are for the most part narrow as it was all rowhouses. Subsequently, the two addresses wouldn’t be too far apart.

The address most likely is correct. I lived in the 1200 block South and the movie was a block from where I lived, so I concur with the address now noted.

Boxoffice noted in June 1952 that the theater building at 49th & Yocum was being auctioned off. It’s the second paragraph of the Philadelphia items:
http://tinyurl.com/ydcaya2

H.W. Rambo of the Lubin Company opened the new vaudeville/movie house on February 14, 1911 as the Lincoln Theatre at 1317-1325 South 49th Street. A neighboring soda fountain served as the de facto concession stand in the theater’s early days. The theatre closed for a major refresh in 1924 when J.J. Miller sold off the lease. The Murphy-Quigley Company presided over the improvements. It re-emerged under new operator Ray O’Rourke and Quaker City Amusement when it became the Doris Theatre in January of 1925. O'Rourke had previously managed the Orpheum in Germantown and operated a number of West Philly theaters including this one. As the Doris, the venue was now a full-time movie theater complete with pipe organ.

The Doris was equipped with sound (presumably in 1930 under a new 20-year lease) and, in 1939, was modernized once again to the plans of David Supowitz to become a streamline moderne theatre. A 1936 case in which the Doris Theatre personnel refused to sell a movie ticket to an African American patron ended up in court with the plaintiff winning the case. Another case involved the charge that its Bank/Bingo nights amounted to an illegal lottery - which O"Rourke’s theatre won. And another situation involved the playing of Sunday movies.

A.M. and Martin D. Ellis took on the vnue on May 27, 1942 operating it under the last eight years remaining on its lease. The Doris closed permanently at the expiry of its lease with William Holden in “Dear Wife” on May 25, 1950. After being listed for sale or lease, the former Doris was auctioned off in 1952. The building is still standing as of the 2020s.