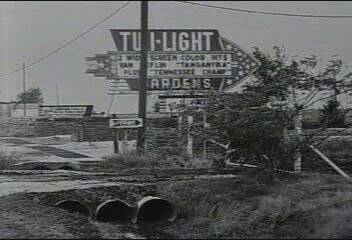 The Twi-Light Drive-In was opened on September 15, 1950 with Forrest Tucker in “Rock Island Trail”. By 1955 it was operated by Video Independent Theaters Inc. It was located near the Village area on N. May Avenue close to W. Britton Road.

Just wanted to take a moment and correct Okie’s assertion that the Quail Twin was built on the site of the old Twilight gardens. Please take a look at this article:

Which is courtesy of the Daily Oklahoman.

It would have been the end of the era when we started going to this theater. We moved from S. 74th and May to Bethany. The first movie I remember here was Planet of the Apes. The kids play area was run down and not operated. Enough of us kids got together and were able to push the train. My parents would comment about movies they saw with their friends, like Dirty Harry and Death Wish. For the longest time I forgot about this theatre but everytime I was north of Britton and May, I had a de-ja-vue feeling that was overhelming.

Newspaper ads show the drive-in name as “Twilight” which is wrong. The drive-in marquee shows it as" Twi-Light" 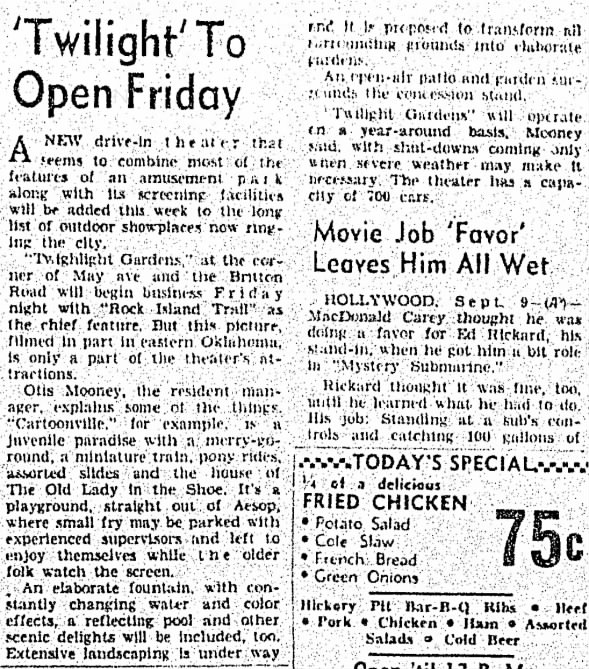 Name-change date hint from the Jan. 9, 1954 Motion Picture Herald under the Oklahoma City header: “A new screen has been installed at Twilight Gardens drive-in theatre.”

Pedantic note: Since Cinema Treasures' style is to list a theater by its final name, the Twilight Gardens should be spelled that way here, without a hyphen. I’ve seen references both ways, but the final newspaper ads and mentions had those two complete words.

Newspapers are known to make mistakes. The marquee never was changed, always showing it as Twi-Light". Cinema Treasures could add both versions of the drive-in name since papers usually had it in print as “Twilight”. CT’s call.

Hi MC! Love that Crawling Thing ad you uploaded – I wonder how the flying and creeping critters played out at a drive-in?

I agree completely that newspapers err, but look at that same ad. In advertisements, paid for by a business, that business approves everything. Years of those ads with a consistent spelling sway me into believing that’s how that business wanted to be known, which is my definition of a name. Then again, the marquee is fixed in metal, so maybe that’s how this drive-in should be remembered.

Also shown in newspapers as “Twilight Gardens Auto Theater”. Makes me wonder just who was responsible for what was put in the ads?

As for the Crawling Thing… there were many casualties!

The article that rivest266 found said that the Twilight Gardens would open on Sept. 15, 1950. I don’t think that happened, at least not then.

There’s no other evidence that the drive-in opened that weekend. On the contrary, the Twilight Gardens ran teaser ads such as “What is Twilight Gardens and Cartoonville” after the 15th and before its grand opening.

Depending on how you classify a soft opening (does invited-guests-only count?), the drive-in had a preview on Sept. 28, 1950, according to this note in Boxoffice about a week later: “Video Independent Theatres held a rehearsal run for its new super de luxe Twilight Gardens Drive-In in Oklahoma City’s exclusive Nichols Hills residential area at May avenue and Britton Road. This preview, held the night before the formal opening, was by invitation. A complete program of Technicolor feature and cartoons was given for the rehearsal run. In operation was the mirror pool and color fountain, the playground, Cartoonville, and its clowns, calliope music, pony rides, merry-go-round, auto racer, miniature train, other rides, slides and swings, all free to the kiddies. The playground opened at 5:30 p. m. for the preview. The drive-in managed by Otis Mooney, has two entrances, wide and spacious ramps, a wishing well, an open-air patio equipped with garden seats and streamlined concession stand. More than 600 cars drove in for the rehearsal run.”

Otherwise, the Twilight Gardens opened on Sept. 29, 1950, which was quoted in its final ad on Sept. 5, 1972. “Last Times Tonite! / Thank you Oklahoma City for your valued patronage over the last 22 years. Twilight Gardens closes after the final showing tonight, a victim of progress, to make room for a new development. … we opened our gates on September 29, 1950, and have operated continuously since, with the exception of several winter nights when blizzards struck their blow.” Actually, the drive-in closed for at least the first two winter seasons, but that was mostly accurate.

One last note - the only time I ever saw the drive-in’s name with a hyphen was on its neon sign. Every other mention, editorially or in ads, had Twilight as one word. That’s the way I’m going to write it from now on.