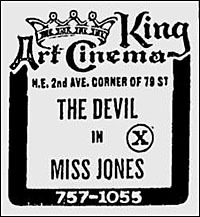 Opened as the 1,084-seat Rosetta Theatre on February 16, 1926 with Tom Mix in “The Yankee Senor”. It was designed in a Spanish Revival style. It was operated by Wometco Enterprises. It was located on NE 2nd Avenue just south of 79th Street, in the area known as Little River. In 1946 it was taken over by Paramount Pictures Inc. and operated through their subsidiary S.A. Lynch. It was remodeled in a Streamline Moderne style to the plans of architects Roy A. Benjamin & Charles P. Neider.

In the latter days of its existence, it operated as an adult movie house named 2nd Avenue Arts Theatre from February 17, 1971 and in early-1973 it became the King Art Cinema. From April 19, 1974 it became the Rex Art Cinema. It was closed around 1977 when its licence was revoked. The overall looks of the marquee and theatre’s main entrance suggested it was a classic movie house at one time.

I Remember Buying Cigarettes In The Machine In The Lobby And Getting Three Pennies Change Back Inside The Cellophane Of The Pall Mall Package. To Sit In The Smoking Section I Had To Pay An Extra 25 cents. What A ‘Funky’ Smell The Carpeting Throughout The Theater Had … WHEW!

Back when a 12-YO kid could ride his bike from El Portal to Little River and see an afternoon of films, the Rosetta was it. The balcony, even back then (late 1960s to early 1970s) was where the stoners would sit. Sad when the theatre went adult and then closed.

I remember the lobby cigarette machine and the three-penny change it returned inside the package cellophane. Like it was yesterday… How about Grable’s Bakery next door and the C & C diner directly across the street? The Rosetta was my home away from home. How I loved the movies! And the hamburgers at Royal Castle after the picture broke and I hopped the bus home to Miami Shores. Thanks for the memories!

Rivest, the Little River was the 79th Street Twin (Bard).

Attempt to convert back from adult movies fails: 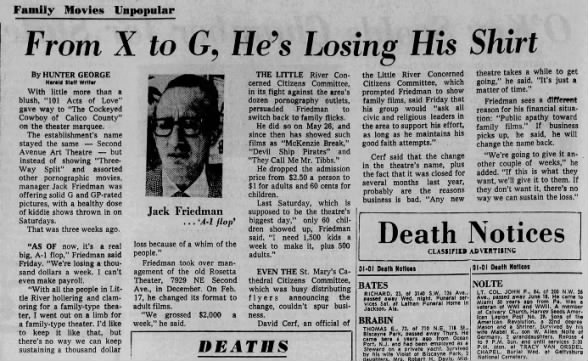 Bert Schrieber announced the Rosetta Theatre in 1925 which - along with the Ruben Building across the street - was providing what was then the Little River neighborhood with a moderne nexus of retail and entertainment. Paramount Theatres opened the 1,045-seat venue with Spanish architecture primarily as a movie house but had a stage for live stage shows and vaudeville. Its large Kimball pipe organ was a huge hit as the venue opened at the tail end of the silent era. The first film on February 16, 1926 was Tom Mix and Tony, the Wonder Horse, in “The Yankee Señor” and was preceded by an organ concert.

On May 5, 1929, the venue added sound to remain viable with Pauline Frederick in “On Trial” playing on the big screen. Wometco assumed the Rosetta in time for its big fifth anniversary celebration in 1931. As the 20-year leasing period was reached, a new Rosetta was in the works. In 1946, Wometco closed the venue for a full month to give the building a shocking streamline moderne makeover to the plans of Roy A. Benjamin and Charles P. Neider. Those plans were complete with a new Flexlume neon attractor, all new box office and lobby and a new air conditioning plant in time for the August 1, 1946 relaunch with Chester Morris in “Counterfiet.” With temperatures in the mid-to-upper 80s at its launch, the air conditioning would be welcomed. The new building also had a confectionery to its right and another retail operation to its left to provide improved economic benefits. It is assumed that a new 25-year lease came with the refresh.

By 1970 and in its 24th year of operation since the refresh, the theater was scuffling with Wometco repostioning it as a double-feature, ultra-discount house with all seats for 35 cents. Wometco left the venue at the expiry of its lease and a new operator tried a new approach. It moved the Rosetta to an adult movie house named the 2nd Avenue Arts Theatre beginning on February 17, 1971 with Lindis Guinness in “101 Acts of Love” and “The Proficient Professor.” Controversy hounded that change. On January 3, 1973, the venue was briefly taken on by the Southland Cinemas circuit as the New King Cinema / King Cinema returning the venue to double feature Hollywood fare. Success was not to be found for Southland.

It was subleased to Waldrick Theatre Corp. Circuit who renamed it the King Art Cinema. “Art” was in the eye of the beholder. On September 7, 1973, the King Art booked “The Devil in Miss Jones.” On September 10, 1973, the film was confiscated with manager Ceasr Alonso booked on an obscenity charge. The King Art Cinema became the subject of a high-profile litmus test for the Miller v. California standard that the Supreme Court had promulgated on June 21, 1973. That ruling said that, using contemporary community standards, obscene films and other content did not have First Amendment protection.

Though many municipalities had used the Miller standard to impound films in the weeks following the landmark decision, most of those situations did not reach a jury as quickly as the the King Art Cinema case. The case was teed up, launched and decided within weeks of the film being impounded. A jury had viewed the film and was deadlocked on the matter leading to a mistrial and the venue and its manager was off the hook all within the month of September 1973.

But the State did not rest and pushed the case further. That civil case is considered perhaps the first known application of Miller v. California. And those sensing the end of “smut” were sadly let down. The second case was decided on December 14, 1973 and the presiding judge spiked the prosecution’s case by saying, the State wanted the court to “miraculously” interpret Miller in such a way that was not “the role of the courts” in exonerating the film, the exhibitor (Waldrick Corp.) and its manager (Alonso). Similar cases within months in Florida’s Orange and Osceola counties went the same way. Threats by the State to appeal the verdict(s) remained just that as that as they appeared to have no grounds to potentially overturn these early decisions on appeal.

To spike the football, “Devil” had an uber successful 6-month run at the King Art Cinema. The venue was renamed as the Rex Art Cinema on April 19, 1974 likely under new ownership. Though the venue was never known as the King Art Theatre, it was known both as the King Cinema (showing Hollywood fare) and the King Art Cinema (showing adult content). And it should be labeled as either the Rosetta Theatre - its name for some 45 years (1926-1971) or the Rex Art Cinema (final four years) as it was never the Rex Art Theatre. It’s believed though not confirmed that the cinema may have closed in 1977 when its license was pulled along with the 79th Street Twin I & II under a new battle waged by Dade County against obscene content. Also, the theatre was at 7929 NE 2nd Avenue across the street. It has long since been demolished and one might say that the Devil made them do it.