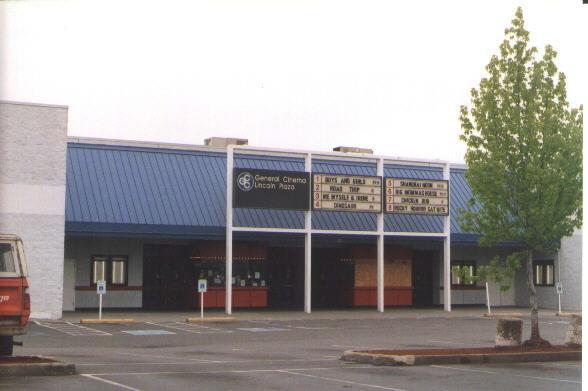 The Lincoln Plaza Cinema was opened on May 20, 1988. I was just up looking around the outside of this theater. It overlooks the new(er) Costco, here in Tacoma. I have vague memories of going to go see a movie at this theater but for the longest time I thought I “remembered” it being where the Krispy Kremes now is in the Tacoma Mall parking lot.

It is becoming a gym. The (Tacoma) News Tribune ran a big story on Jan. 31. The theater has been gutted.

Here’s a link to the story:

Was this equipped with stadium seating? It looks like it could have been a fairly decent venue. Wonder if it would have fared better if it had been in a location which greater street visibility? Are their any vintage GCC, circa 1965-1975, venues still around?

This theater did not have stadium seating. There are none of the older style (William Reisman design) GCC houses remaining in Washington State.

Yes I believe this is one of those late 80’s buildings. It had sloped floors. It was hard to find because they had to put up the marquee on busy 38th street so people could be directed to the theater.

GCC built 4 similar buildings in the area in the mid – late 1980’s. Lincoln Plaza in Tacoma, Gateway in Federal Way, Kitsap Mall in Silverdale, and Renton Village in Renton. I was the opening projectionist for Kitsap and Renton Village. All except the Gateway were a bit hard to find. I can’t speak as to the rent but I know that 20+ year leases were common and GCC came to regret them.

From examining the archive photo here in the cinema was in operation, it seems to strongly resemble the Gateway 8 on Federal Way. Are the two identical?

They were not identical but very similar in design as were all GCC houses of that era. I believe that the architects were the Cambridge Seven Group out of Boston, MA.