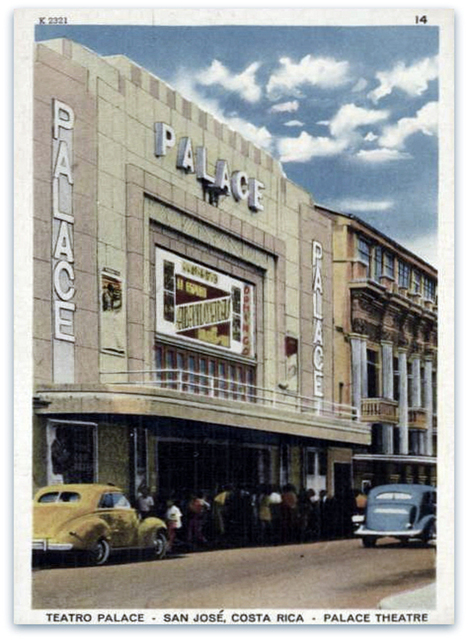 San Jose’s former Palace Theatre was built in the 1930’s as a variety theatre and cinema. It also contained a dance hall. It was declared a National Heritage site on November 8, 2000, and was later chosen by the Government for restoration.

The building is now a fast-food emporium called the Food Mall.

That’s a sad way to end up, isn’t it? I saw Burger King, Church’s Fried Chicken and Papa John’s. Here is a related article from 2004:

The Food Mall concept and the local talent were key factors in the decision to film in Costa Rica.

“The efforts of Corporacion Alimentos del Rey began weeks before the filming and paved the way for a smooth and successful filming operation,‘’ stated Melinda Ennis-Roughton, Chief Marketing Officer for Church’s Chicken.

From the 1930s a postcard image of the Palace in San Jose Costa Rica.