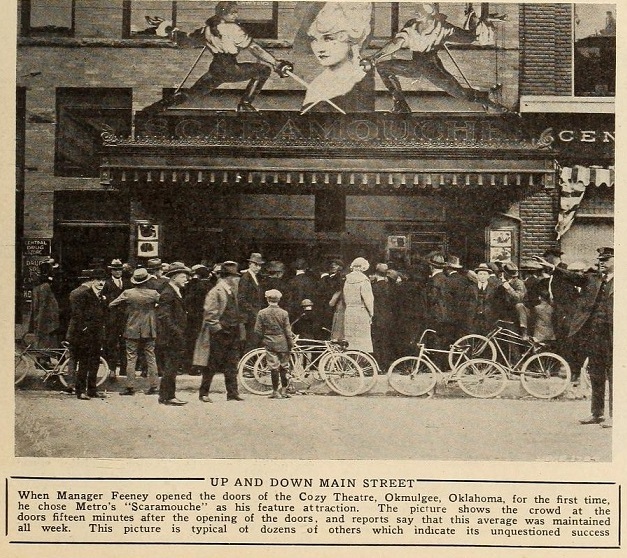 The Cozy Theatre was built inside former retail space. It was a small theatre, probably furnished by a local interior decorator who did a nice job on limited funds. It was opened December 14, 1914. A large concession stand dominated a cramped, narrow lobby.

The auditorium, fashioned to resemble a tent with canvas wall panels and a flax covered ceiling, was of the “reverse” floor plan, meaning the projection booth was situated in the rear of the auditorim, the screen backed up to the lobby wall, and seats faced entrance doors.

The space became a jewelry store until the building burned down in the mid-1990’s.

Oklahoma State Historical Society has vintage photos of this cinema when it was known as Rex. To see images type in name ‘Rex Theatre’ on below site -
View link

A January 12, 1946, Boxoffice article about the death of Tulsa exhibitor John Edward Feeney says “In 1914 he bought the Cozy Theatre at Okmulgee….” Was this an entirely different Cozy Theatre, or did it become the Rex and then later go back to the name Cozy? The building in the Historical Society photo certainly looks as though it would have been built before 1914, and that marquee could easily have dated from the early 20th century.

This site has clear vintage interior/exterior shots of the old Cozy Theater when it was known as the Rex Theatre.
http://www.roadsideoklahoma.com/node/579