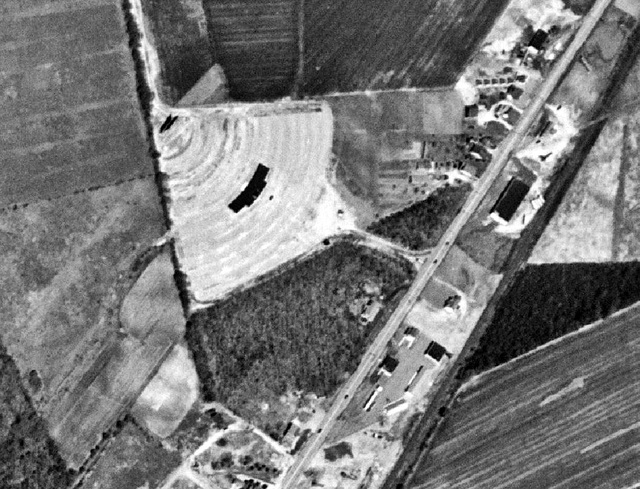 This drive-in was unique in that it had two heated indoor viewing areas with glass fronts, which allowed year round viewing. It opened July 7, 1950 with Jeanne Crain in “Centennial Summer”. The Bridgeton Drive-In was closed in 1989.

The Bridgeton Drive-in closed in 1989. Steve and Remy Fox were the last to run it. In the seventies they had Brenkert projectors in the upstairs booth. By 1989 they had Century projectors. A guy named Jim, I think, was running them. The place was in a sad state of dis-repair. A Shoprite super market now occupies the site on RT. 77 (Pearl Street). The concrete wall on the exit road still exists.

We used to go there for 3 movies for 5 dollars a car lot. It was great fun with crude radio sound (AM) and weak drive up car speakers. The reflectors where shot and the picture was dim until it got realy dark. I loved going there. When I was very young there was a nice playground by the screen and Jerrys Giant Hoagies was just outside the entrance. To this day I have never had a Hoagie as good as Jerry’s

Steve and Remy Fox were the Fox Brothers from Philadelphia. It was the second drive-in constructed in New Jersey and the first in the country to have indoor seating. Projection equipment was Century in 1975 (I worked in the booth) until it was closed. The lamphouses were carbon arc (no water cooled contacts), supplied by an AC/DC generator. Tube amplifiers were used for sound. You could get an in-car heater from the concession stand in winter (they held your car registration hostage). A special attachment was placed atop a propane torch cylinder. I remember the top had to be preheated by another torch. Surprisingly, they worked well for about 3 to 4 hours. Lou was the ticket seller in the mid-70’s (he fixed automotive radiators in the daytime). The drive-in was sort of in a bowl with gravel sloping by the speaker posts so the front of cars tilted upward toward the screen. The programs were a double feature (changed weekly) where the first film was run twice so you could see three movies for the price of one. The projectionists were represented by IATSE local 472. The head projectionist, Ed, was the business agent for the local.

This opened on July 7th, 1950. Grand opening ad in the photo section.

Mr_Film, those were the days. The drive ins and dollar houses always had the double features with the main feature run twice. I remember my father who was secretary of IATSE local 379 had to see someone at one of the drive ins, and they were showing “Woodstock” and “Prudence and the Pill” together, and “Woodstock” was shown twice.