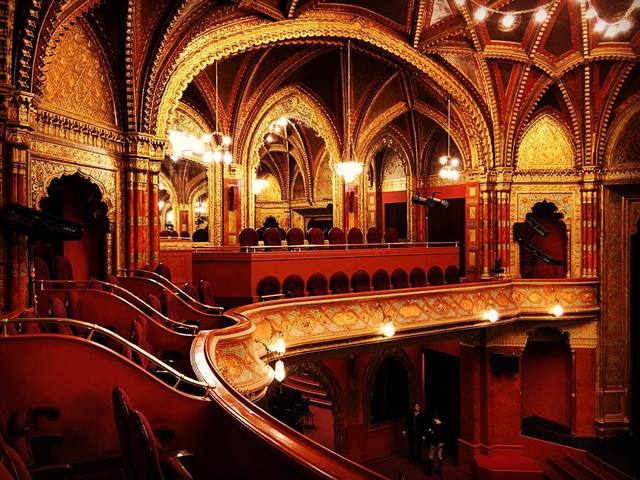 Located on the Pest side of the city. This opened on 4th November 1899 as a live theatre, it had started to screen films from 1900 as part of the programme. From 23rd December 1916 it was operating as a full time cinema. From 1930 it was operated by Ufa and later from 1945 began screening films from Sovexport. Today this magnificent building is well maintained and screens first run movies as the Urania Nemzeti Filmszinhaz (Urania National Filmhouse).

The original 700 seat auditorium and foyer spaces are intact with their elaborate Moorish style decorations. Recently two small screens have been added, without destroying original features.

If in Budapest, this really needs to be seen. Amazingly the cinema retains splendid and really ornate entry spaces worth a visit alone. An Indian themed cafe in the crypt like basement, though new, is amazingly appropriate while another cafe upstairs on the first floor is also worth a visit.

Not my favorite movie house in Budapest, but it certainly has the finest architecture (a close second is Corvin).

Amazing architecture, although since it is 100% Moorish/Moroccan, one cannot begin to fathom how come the Urania is the one that became the Hungarian National Film Theater. Anybody knows?

Beats circles around most other Budapest old-school film theaters, especially that God-awful, kitschy multiplex, the Corvin.

I had one of the worst cinematic film presentations at the Urania Filnmszinhaz, however. As a child, my mother took me there to see “The Wizard of Oz.” Well, this was in the summer of 1958 or 1959, and the Urania had recently been equipped with a wide screen and projector capable of showing CinemaScope films. It also had some sort of a “cooling system” installed for the auditorium. Although “The Wizard of Oz” was not a CinemaScope production, somehow the Urania projectionist had left the anamorphic lens on the projector. I guess he must have figured that since the movie was American and shot in color, it must have been in the CinemaScope format and therefore needed the anamorphic lens attachment.

So, we were perhaps the only movie audience in history who have watched “The Wizard of Oz” theatrically in the then prevalent 2.55:1 aspect ratio CinemaScope, instead of in 1.37:1 normal frame. I remember really getting a mega-headache looking at the distorted human shapes on-screen.

I did not know all the technical details of why the picture looked as funky as it did back then, but in the intervening years figured it out. :~))

Very friendly and stunning venue – must rank in the top 10 of the most beautiful cinemas in the world!

And some photographs of the beautiful auditorium from the same visit:–