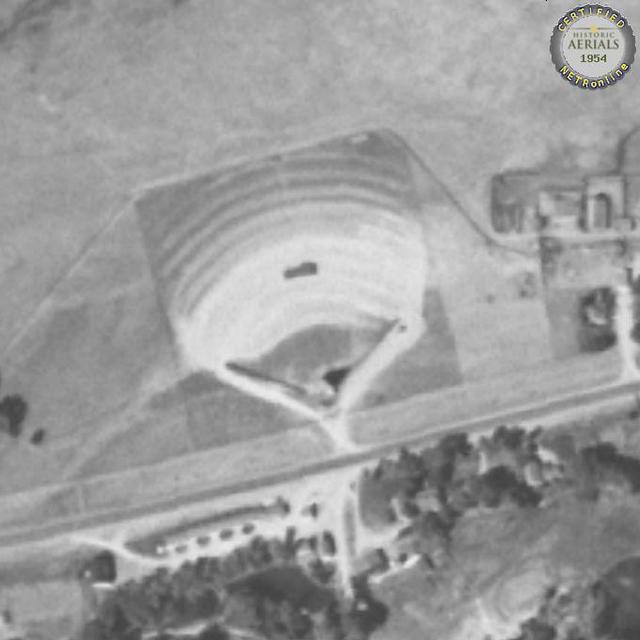 The Groy Family Drive-In was opened on May 12, 1950 with Jon Hall in “Michigan Kid” & George P. Breakston in “Urubu”. It had a capacity for 407 cars. It was operated by the Groy Family who constructed it for the Unique Theater. Salida’s Wal-Mart is on the site of the drive-in.

I have a Knox Drive-in in Salida in 1956 parking 350 cars and owned by Knox Theatre Inc.

Wow another drive-in that is the site of anotherWal-Mart.

Sure could use more info and photos.

From the March 17, 1956 Motion Picture Herald: “Atlas Theatres have taken over the lease on the Groy drive-in, Salida, Colo., from Ted Knox. Atlas owns the conventional Salida in town.”

While the MPA drive-in list was on cruise control, the MPA circuit list showed that Atlas Theatre Corp. of Denver included the Groy Drive-In among its holdings from 1957 through 1966. It makes me wonder whether this drive-in was ever really named the Knox or whether it was always the Groy.

A stronger hint for the opening date was reported in the May 20, 1950 issue of BoxOffice:

After a sneak preview the night before for employees and invited guests, the Groy Drive-In held its Grand Opening on May 12, 1950, according to notes in the Salida Daily Mail-Record that week. Its opening program was “The Michigan Kid” plus “Urubu” and other short subjects.

“Ben and Louis Groy, Salida residents for many years, have been overseeing the construction of their outdoor theatre for the past several weeks. Located but a short distance across from the Little River Motel and Cafe, it is easily accessible for tourists who are passing thru on Highway 50.”

Ben and Louis took out a three-column display ad the following Monday to say “Thanks to the wonderful people of Salida” for making their Grand Opening “a huge success”.