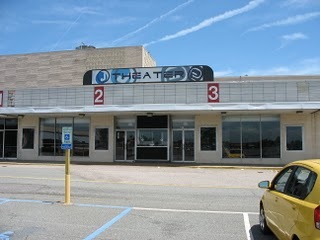 Opened as a single screen independent of 800 seats in July 1965, sold to Martin Theatres and remodeled into one of the first “twins” in 1969. Reopened in that format on May 1, 1970… not by “splitting”, but by adding a completely new addition (with 500 seats) onto the original facility. One of the very first multi-screen complexes.

Sold to Neighborhood Theatres around the late-1980’s which split the smaller twin, creating a triple. Downgraded to a dollar house in its later years. Closed in 1997. It still stands, in use as a church.

I was involved in adding “DOLBY” CP-50 sound upgrades in the early 80’s, also adding projection and sound eguipment for new additions when theatre was purchased by Neiborhood Theatres.

It is now a Church – see photos

Operated as a single screen, double screen and finally triple screen from 1965 to 1997

I just posted a photo of the Grand Opening ad dated July 1, 1965

Just posted a photo of the ad announcing the addition of the third theater – June 14, 1991

Just posted a photo of an ad announcing the opening of the twin.

May 6th, 1971 grand opening ad as a twin in the photo section as well as below.