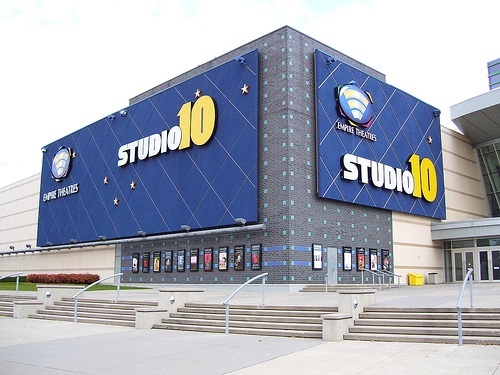 That was the previous Square One cinemas 4, opened and operated by Famous Players from when the mall opened in 1973 until 1997 when the first Coliseum was opened by them across the street.

Now renamed to Landmark in 2013. Former Coliseum “replaced” the former Square One.

This theatre closed October 3rd according to this newspaper report. Apparently the mall wanted to take over the space for different purposes. Too bad, was a nice theatre.

Interesting, with this closing and SilverCity 10 earlier in the year, Mississauga has lost 20 screens within this year. That leaves only the 16 screen Courtney Park, the 12 screen Cineplex Cinemas (formerly Coliseum) and the 4 screen Cine Starz in a city of 750,000. There are many areas of the city that could use a movie theatre, I only hope that with these closings, the theatre companies are scouting for new locations. It’s also interesting that when Cineplex opened the now defunct Landmark 10 back in 2001, it closed the 5 screen Erin Mills town centre location. Now that Square One is closed, maybe they should look at going back in that area, or maybe Meadowvale. Also there has been nothing built in southern Mississauga south of the QEW, the last movie house down there was the former Vogue / Credit Cinema which closed in the 70s!

In late 2020, Cineplex would open a new concept called “Junxion”, which combines a movie theatre with an entertainment centre (a la The Rec Room). It will also have a food hall and even an outdoor patio on the roof. This will open in Erin Mills Town Centre’s former Sears space and will expand to other locations in the future (such as Kildonan Place in Winnipeg). At least Cineplex is making a new theatre for Mississauga.

This theatre opened on November 21, 2001, with Novocaine, The Man Who Wasn’t There, Black Knight, Amelie, and Spy Game.

There is one thing I have always been curious about this location, especially when around the time it opened, and hoping some Mississauga/Toronto based CT'ers can shed some light on it.

A Yelp review commented on it and a YouTube video mentions it, but apparently there was a type of balcony and VIP type lobby when the theater opened, and according to one Yelper that the top rows in the largest auditoriums had a special type of balcony and seating?

Yet in the YouTube video, which was shot during the Empire Theatres days, it shows two teenagers filming themselves going up an elevator to this section. Yet when this video was filmed, the stairway was roped off from the staircase downstairs, and it appeared to be closed. The balcony area itself is completely empty save for a couple of leather couches and doors to JUST the largest auditoriums.

It never seemed like this location did very well, either, being in close proximity to Coliseum/Cineplex Cinemas Mississauga and even more surprising that it’s in one of the biggest malls in the country.