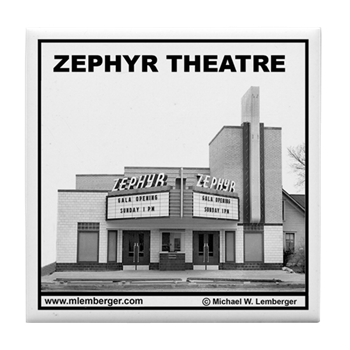 A.H. Theatres (controlled by Paramount-Publix) was one chain for this theatre, in 1955 it was under the Central States Theatres chain.

The Chicago Burlington and Quincy Railroad (now part of the BNSF Railway), which ran from Chicago to Denver (and many other places) went through Ottumwa, Iowa. In 1934 when all trains had steam locomotives, the world’s first successful disel-powered aeronautical engineered design streamline, which featured extensive use of durable horizontal stainless- steel fluting giving it a natural silver apparance, went into service. It replaced a train that weighed eight times as much and made a dash from one end of the CB & Q, in Denver, to the other in Chicago in about half the time of a conventional train.

Ralph Budd the president of the Burlington had been reading “The Canterbury Tales”. The story begins with the pilgrims setting out on a journey, inspired by the budding springtime and by Zephyrus, the gentle and nuturing west wind. Zephyrus was the west wind and bringer of light spring and early summer breezes.

Budd thought that would be an excellent name for a sleek new traveling machine - Zephyr. So the train was named the Pioneer Zephyr, the train was such a hit other trans were added, Ak-Sar-Ben (Nebraska spelled backwards) Zephyr, Nebraska Zephyr, Denver Zephyr and California Zephyr. All these Zephyrs went through Ottumwa, seems like it would be a neat name for a theatre!

Alas, all these trains and the theatre stopped running long ago (except for the California Zephyr and Illinois Zephyr which are Amtrak routes in the 21st century).

On the 26th aniversary of the historic dash the “Q” donated the Pioneer Zephyr to the Chicago Museum of Science and Industy where it is proudly on display just outside the main entrance from the underground parking area for the museum, where it is one of the more popular exhibits. The Zephyr Theatre has become a Masonic Lodge, but were there other Zephyr Theatres along the “Burlington Route”?

I recently took a trip to Ottumwa and took pictures of this location. It sure looks like the same building that was once a theater but here is some pics. See for yourself.

There are also other pics related to other theaters in Ottumwa, IA. in this link.

The November 3, 1940, issue of Boxoffice Magazine ran an item saying that excavation had begun for a theater on Church Street in Ottumwa. Although the name of the theater was not given, the photos match the description of the facade of the proposed house, which was to be a brick building faced with glazed tile and glass blocks. The theater was designed by the Des Moines firm Wetherell & Harrison, and was to have 525 seats.

The Zephyr Theatre building had been drastically altered by the time the photo Milton linked to above was taken. A CafePress store that sells objects with old photos and memorabilia on them has this photo depicting how the Zephyr originally looked as Wetherell & Harrison designed it.

Yes, it looks like they added a 2nd story and removed the tower piece off the Northeast corner of the building but you look and the door placement and the tilework even look VERY similar.

Current function should be: Masonic Lodge