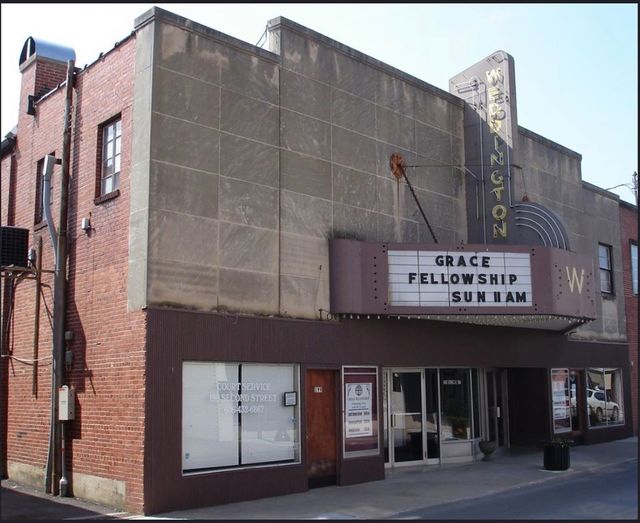 The 700-seat Weddington Theatre was opened by 1920. It was destroyed by fire on February 2, 1946. It was rebuilt and reopened in the fall of 1948. It was remodeled in April 1956. It was still open in the late-1980’s. Following closure it became a church. It has since been demolished.

I’ve found the Weddington Theatre mentioned in Boxoffice as early as April 30, 1938. Operator W.J. Ward had installed a modern cooling system in the house. W.J. Ward was mentioned as a theater operator in Pikeville in the October 19, 1935, issue of Boxoffice, though the name of his theater was not mentioned.

The Weddington was destroyed by fire on February 2, 1946, said the February 9 issue of Boxoffice. Rebuilding was long delayed. Boxoffice of June 5, 1948, said that construction was well underway, but the opening did not take place until that fall, and was reported in Boxoffice of November 15. The rebuilt house had been leased to Darnell Theatres.

Boxoffice of October 8, 1955, said that the Weddington and Liberty theaters at Pikeville were then controlled by Cumberland Theatres. The Liberty had just reopened, with newly installed CinemaScope equipment, after having been closed for some time (the previous year it had been on a one-day-a-week schedule.)

The Weddington underwent remodeling and redecoration in 1956, according to the May 19 issue of Boxoffice. Less than a year later, severe flooding put the Weddington Theatre under ten feet of water, as reported by Boxoffice of February 16, 1957. The house might have remained closed for a few years after that, as I don’t find it mentioned in Boxoffice again until the issue of May 9, 1960, where it was listed among theaters for which National Theatre Supply of Cincinnati had recently supplied carpeting.

A May 4, 1964, item about exhibitor Sam T. Isaac, then running for Congress from Kentucky’s 5th district, said that he operated the Weddington and Liberty theaters at Pikesville (for some reason, Boxoffice refers to the town as Pikesville almost as often as it calls it Pikeville), among others.

In the 1970s, several issues of Boxoffice mention an exhibition company called Powell Enterprises, headed by Ernie Powell, being headquartered in Pikeville (or Pikesville.) I’ve been unable to find specific Pikeville theater names in any of these items, though. But the Weddington, at least, was still in operation as late as 1979, judging from the photo with “The Amityville Horror” featured on the marquee.

I ran weddington from 1987 to whenever it was a theater last. I miss it so much. Wish I had pics before they tore it down. But got have court house for the druggies