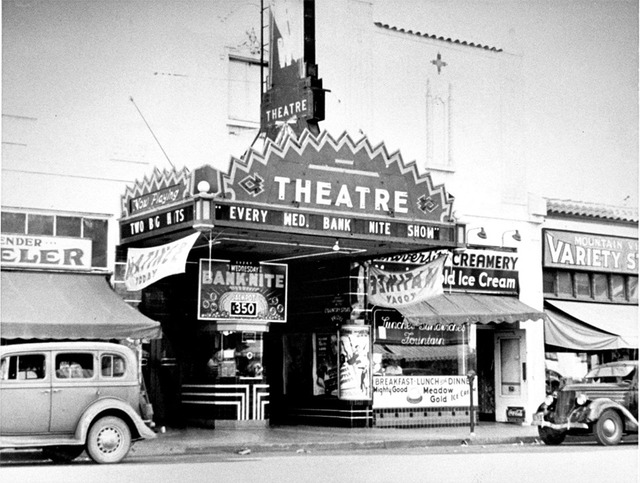 The Mountain View Theatre opened in 1930, and has an important place in the memory of most long term residents of this Bay Area city. The local paper proudly proclaimed that “there will not be another show house on the peninsula with a more beautiful facade, and few, if any, with a more commodious or more comfortable interior” when the theatre opened.

The theatre originally had an ornate Mission Revival facade, but various remodels have wiped away many of the original features. The theatre closed in 1987, and has since housed a series of nightclubs.

The conversion of the theater into a western themed night club, the Rio Grande, in the mid-1990s removed the c. 1962 interior. The building still sits empty, it’s too large for most restaurants (Downtown Mountain View’s current forte). The city is also making it difficult to reopen it as a nightclub because of major problems with the last one at the location, the Lime Light.

In the past year there has been some interest in restoring its facade and opening a new theater inside, but nothing has really gotten off the ground. A restoration of the interior to its original condition would be nearly impossible, since no photos of the original interior have been uncovered (unless someone out there has some leads other than the local library). It’s basically a blank slate for anyone that wants to bring movies back to this great location. For more pictures and information on the old Mt. View, check out the Mountain View Preservation Alliance’s page on it at:

is there a way I can get a copy of the Mt. View Theater? Or if there are any old pictures of the Moffett Drive-In??
Pls advise.
Thanks!!

The building is currently a restaurant and nightclub called the Monte Carlo. It has a website at www.montecarlonightclub.com where there are current photos. The interior bears no resemblance to the original plan, except that the stage and balcony are still present. I used to live in Mountain View and saw this building go through several incarnations, from being decrepit and empty to the Rio Grande to the Limelight and now to the Monte Carlo (there might have been another name in there somewhere…). I’m sorry that it couldn’t have been maintained as a theater, but with a huge multiplex just a few blocks away, I can see why no one could make it work out. In a way it’s sad, but in another way I see it as a positive thing that the building itself was not demolished, and at least is experiencing creative reuse in some way.

It is no longer the Monte Carlo. The sign has been removed from the marquee, and the building is closed.

A Latin bistro now is open in the Mountain View. I have not been inside since the buisiness change, but they serve lunch both inside and on the sidewalk in front (as do many restaurants along Castro St.).

I used to go to this theater when I was a kid in the 80’s. I remember seeing a double bill of Red Dawn and 2010 in 1984 and also rushing from dinner to catch Christine. This along with The Hacienda, Meridian Quad, Sunnyvale 6 and Old Mill 6 were my favorite theaters to go to. I lived in Mtn. View from 1975 till 2000. I really miss all those theaters. Mervyn’s restaurant was right by the theater, I remember eating there as well.

Above 1930s photo added to Photos, via Martin King. Theatre was spelled with “re”. 2009 Photobucket link above no longer opens.

This web page, though it misspells architect A. A. Cantin’s name as “Canton”, has some information about the early days of the Mountain View Theatre. The house was opened on May 8, 1926, by Fritz Campen Jr., who had previously operated the Glenn Theatre. Campen sold the theater to Anthony Blanco of San Francisco in 1929.