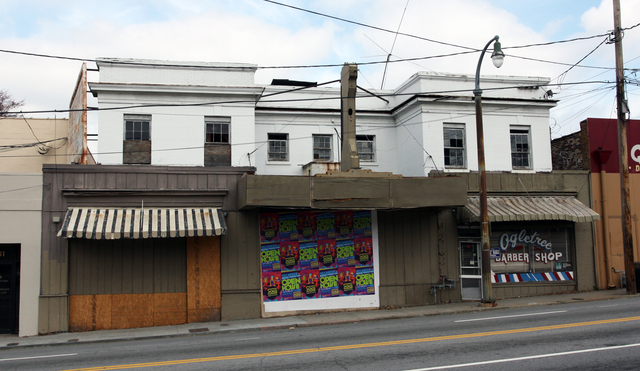 The Ashby was an African-American theatre managed by the Bailey Theaters circuit. To the best of my finite knowledge, the building still existed, albeit not as a theatre, on up through the 1980’s on this stretch that was formerly known as Hunter Street.

The Ashby Theater is still standing. The Barber Shop is only in a small part of the building.

In the 1990s there was a television movie made in Atlanta called Soul Survivor. Isaac Hayes was in it as well as three other African American actors. They played a defunct soul group that a British DJ wanted to bring back. When he first came to Memphis (although the movie was filmed in Atlanta) he came to this theater to see a recording studio. The exterior was the old Ashby Theater but the interior did not look like it does from the outside.

Chuck The Ashby Theater has not been called the Edifice Dinner Theater for over 20 years. If you drive by the theater today, you will see the marquee is covered up.

The main facade of the building has a small entrance, a glass door – no sign indicating what’s in it, but the facade is recently repainted – nothing’s boarded up.