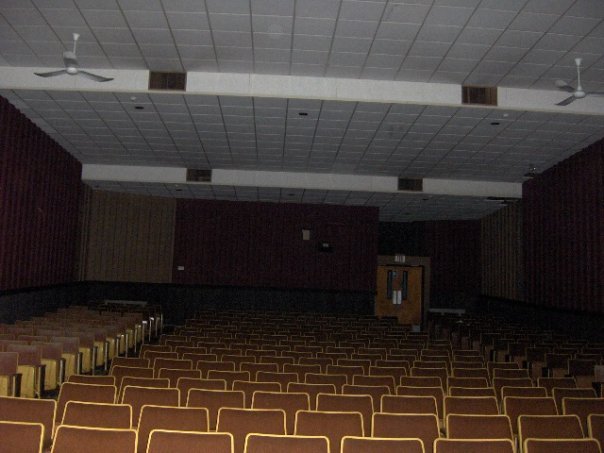 The twin screen Tri-Boro Cinemas opened on January 2, 1970 with Ron Moody in “Oliver” & Maximilion Schell in “Krakatoa, East of Java”. On November 27, 1985 it reopened after conversion into a 6-sceen theatre. In 1986 two more screens were added. In 1988 another 4-screens were added, and it was renamed Tri-Boro Cinemas. It was closed in the mid-2000’s and was demolished in early-2008.

This was where I saw almost every movie as a kid. It’s how I remember seeing movies. In fact, watching Back to the Future here when I was 5 years old is what caused me to want to become a filmmaker. It started out as a 2-plex, and boomed into a 12 plex. I think at some point, they may have even twinned some of the theatres into a 13 or 14 plex.

I remember the walls had these little holes all over the sides, and I would have nightmares of tons of spaghetti coming out of it and drowning me. The theatre closed after the nearby North Attleboro showcase opened with all digital sound and larger screens. But it’s the quintessential 1980’s multiplex. Sticky floors, red carpet, lots of kids, moviehopping…

Weird bit of trivia— it was also one of the only theatres in memory to play the film “It Runs in the Family.” The unofficial sequel to A Christmas Story.

what years were those pics??

Dec was the Official Opening with Guest Stars Jimmy Sullivan (Court Magistrate), Kai Shang (long time friend) Mama Louisa Pichi and family, local Union (shop stewarts) Carol Wontkowski (Sun Chronicle Rep) there were over 200 people in attendance for Offiacial Opening night from Around The Massacusettes region
I my self how ever Ran the Union Theatre 123 on Opening Night

Was this theater operated under Entertainment Cinemas of Boston

Was this theater operated under Entertainment Cinemas of Boston
posted by fred on Jun 27, 2008 at 4:23am

Melrose Enterprize bought out the land from the reality company and William Leatherbee pasted away three yrs later.
Boston Conccession was a partner of Melrose Enterprize and bought out the lease from Roxy Pichi after Roxy had won the battle to get all first run movies at the Triboro Cinema location paving the way for the Union to get first run movies quicker it all went to court and Roxy was to either take the pay off or when the lease ran out leave so it was a done deal and Roxy sold out two yrs eairly. Melrose Enterprize had all ready got permits to built 6 cinema there then they built 4 more and later added the other two making it a 12 plex Origiannly it was gonna be a 24 plex with stadium seating. However there were 5 partner that owned the Triboro, you had Melrose, Manasion,Boston Con,Demarios, and the film company that produced the horror pictures later on selling out the buisness to the reacent owners. and then it went to hell. fell apart and all Run Down i had run the projectors there a few time,worked conccession, usher and Asst manager in the eairly to mid 80’s However the Union was my home. til Roxy sold the Union theatre to Theatre Development Enterprizes Inc. then i became the Manager Projectionist..

This should be changed to “Closed/Demolished”. The building was razed in early 2008. It decayed surprising fast for being closed for less than 3 years. But I guess vandalism and age will do that. An article from the Attleboro Sun-Chronicle about the demoltion is here. Article includes a picture of demolition.

The Tri-Boro Cinemas opened on January 2, 1970 with “Oliver” at Screen 1 and “Krakatoa” at Screen 2. The theater operated as a twin for the first 15 years.

On November 24, 1985, after running “That Was Then, This Is Now” at Screen 1 and “Better Off Dead” at Screen 2, the theater closed for three days due to conversion, which led the twin converting into a 6-screen theater. The theater reopened as the Tri-Boro Cinemas 6 on November 27, 1985 with six screens. A year later, two more screens were added, and another four were added bringing a total to 12 screens in 1988 as simply Tri-Boro Cinemas.