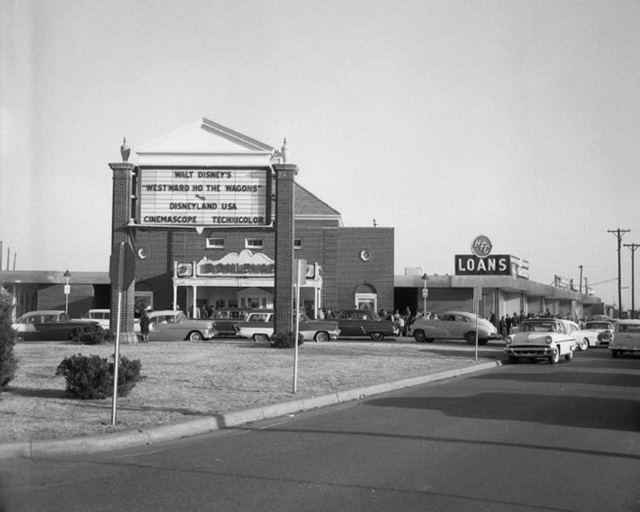 The Boulevard Theatre was opened on May 17, 1945 with Betty Grable in “Diamond Horseshoe”. It was part of the George Washington Boulevard Shopping Plaza. In 1963 it was taken over by the National =General Corporation and in 1973 Mann Theatres took over. On February 1m, 1980 Dickinson Theatres took over and they closed the Boulevard Theatre on February 24, 1984 with Al Pacino in “Scarface”.

It became a gymnasium, then a banquet hall and in 2011 it became a live entertainment space named The Boulevard, which closed around 2012. Used by an internet company, the building was vacant in 2022.

Based on the ‘flickr’ picture above they really butchered the place. It kind of had an old english look.
The two ‘towers’ in front held the attraction signage, you can see where the sign was bolted to them. The building was made of red brick which has been painted. The smaller boarded up part would have been the boxoffice. The stores on the George Washington Blvd. side all had glass fronts. That would be the extent of the ‘shopping center.’ Parking was behind the theatre and you would walk through the breeze way between the stores and the theatre to get to the front of the theatre. A huge Sears store was directly across the street.

When I worked for Mann in Wichita this theatre was where the ads were created. In the upper left corner of the building was the ad room, and the manager, Buddy Brown, who was very creative, drew up the ads for all the Wichita Mann theatres. He would take a black pen that was dipped in ink and draw out the borders, some borders would be cut from the Mann borders and I would go in with rubber cement and cut and paste the title art of the movie to the page. In that office was an extensive library of probably 1950 to 1975 (when I worked there) newspaper ad slicks.

If you should happen to have a link to the article you are writing about please post it as I would like to read it.

I worked at one time in the district office for Mann out of the former Mall Cinema on East Harry street. There were numerous discussions about twinning many of the theatres in our district. In the discussions about the Boulevard it was decided that it would not be practical because the auditoriums would be very long and narrow, much more than the Fox Garvey in downtown Wichita. Adding an additional auditorium would not work because of the shops on either side of the theatre, not enough space. There was discussion about adding an auditorium at the back of the building, but that would cut into the parking lot. So if this theatre was actually twinned I am not aware of it, it was discussed at length, but as far as I not followed through with.

It was a stunning marquee, you can still see the upright ‘poles’ in the picture at the top of this page. Thanks for posting. —jw

Here is a 1956 photo of the Boulevard Theater.

I worked my first job at the Boulevard Theater from 1981 through 1983. I was 15 years old at the start. We had a lot of fun there. Old fashion theater where I eventually was trained to do everything. Good work experience for later in life. A lot of odd ducks worked in that industry as well so that was interesting too. One of our managers was convinced it was haunted and we would stay up late in the early morning hours sitting in the theater spooking ourselves out. The really brave ones went into the tunnels under the old stage. It closed around 1984 about a year after I left.

Here’s a new 4-page 50th anniversary FIDDLER ON THE ROOF retrospective featuring a roadshow playdate chronology and historian Q&A. The Boulevard’s run is mentioned in the piece.

The entirety of the entry above submitted by Jeff Chapman reads as one sentence, “The Boulevard Theatre was opened on May 17, 1945, and was part of the Boulevard Shopping Center.” Just to add some additional information here, Fox Midwest Theatres had announced the new Boulevard Theatre in January of 1941. (The entry erroneously lists Fox Theatres of Reading, PA - an unrelated company.)The Boulevard was billed as Wichita’s first suburban theater in which there would be a parking spot for each theatre patron. Architect Glenn Thomas’ original design was done in Spanish Colonial to match the neighborhood’s existing structures while also having Old West elements from the nearby Chisholm Trail as accents.

The U.S. entry into World War II delayed the project significantly even though the project was granted a waiver exemption due to the aviation plant in town. The venue finally opened on May 17, 1945 likely on a 20-year leasing agreement with Betty Grable in Billy Rose’s “Diamond Horseshoes.” The theater’s curtain featured a scene from the Chisholm Trail with a cowboy pursuing a steer. A decorative map by Robert T. Atchinson hung in the lobby showing the path of that Trail.

The theater was joined by a shopping strip called the George Washington Boulevard Shopping Plaza in 1949. One of the longest-running stores there was McMullen Jewelry which stayed for some 70 years. The theater building, however, remained an outparcel to the Plaza until it was joined by nine other stores in an expansion in 1956 called the Boulevard Shops. The theater took on a more modern Colonial Revival to match the other stores that extended perpendicularly to the cinema. It was transitioned to widescreen projection in January of 1954 to present CinemaScope films to remain viable.

Delaware-based National Theatre and Television (N.T.&T) took on the Fox Midwest locations morphing to National General Corporation (NGC) during 1963. In 1973, the NGC circuit more known as National General was taken on by Mann Theatres which assumed operation of the Boulevard Theatre. The Bouleveard, Mall, and Fox Twin were among 25 Mann locations sold to the Dickinson Operating Company effective on February 1, 1980. Dickinson Theatres closed the Boulevard Theatre likely at the end of a second 20-year lease on February 2, 1984 with Al Pacino in “Scarface.”

The former theater space was converted into a short-lived Gold’s Gym followed a very brief Ulitmated Bodies Gym in 1987. The venue became headquarters for the Amateur Poker League in the 2000s. In March of 2009, it became the Boulevard Banquet Hall. The venue then became a live performance space called The Boulevard in 2011 closing about a year later. It was then utilized by NetSystems, an Internet company. The building may be vacant as of the 2020s. In 2022, perhaps as an homage to the long-standing theater, the Towne West Mall’s long-running cinema was renamed as the Boulevard Theatres.