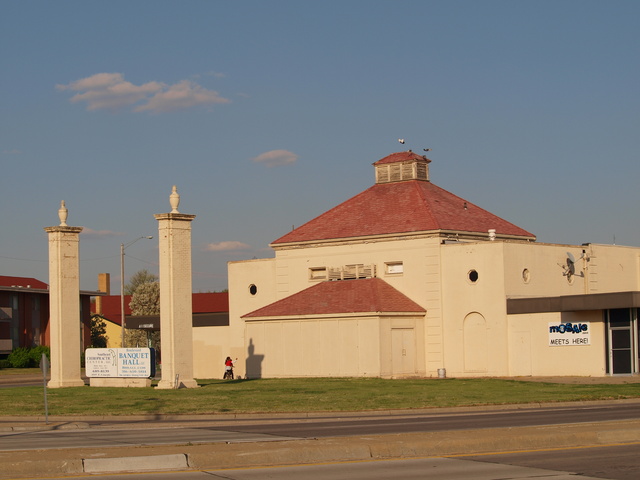 The Boulevard Theatre was opened on May 17, 1945, and was part of the Boulevard Shopping Center.

On the below web sites I suspect that the Boulevard and 1944 Fox Boulevard are one and the same,
View link
View link

The Fox Boulevard Theatre was the corporate headquarters of the Amateur Poker League AKA WPTAPL from 2004 to 2009. In March 2009, it became the Boulevard Banquet Hall, LLC owned and operated by Blake and Erika Baty. You can visit our website at www.bbhall.com

Based on the ‘flickr’ picture above they really butchered the place. It kind of had an old english look.
The two ‘towers’ in front held the attraction signage, you can see where the sign was bolted to them. The building was made of red brick which has been painted. The smaller boarded up part would have been the boxoffice. The stores on the George Washington Blvd. side all had glass fronts. That would be the extent of the ‘shopping center.’ Parking was behind the theatre and you would walk through the breeze way between the stores and the theatre to get to the front of the theatre. A huge Sears store was directly across the street.

When I worked for Mann in Wichita this theatre was where the ads were created. In the upper left corner of the building was the ad room, and the manager, Buddy Brown, who was very creative, drew up the ads for all the Wichita Mann theatres. He would take a black pen that was dipped in ink and draw out the borders, some borders would be cut from the Mann borders and I would go in with rubber cement and cut and paste the title art of the movie to the page. In that office was an extensive library of probably 1950 to 1975 (when I worked there) newspaper ad slicks.

If you should happen to have a link to the article you are writing about please post it as I would like to read it.

I worked at one time in the district office for Mann out of the former Mall Cinema on East Harry street. There were numerous discussions about twinning many of the theatres in our district. In the discussions about the Boulevard it was decided that it would not be practical because the auditoriums would be very long and narrow, much more than the Fox Garvey in downtown Wichita. Adding an additional auditorium would not work because of the shops on either side of the theatre, not enough space. There was discussion about adding an auditorium at the back of the building, but that would cut into the parking lot. So if this theatre was actually twinned I am not aware of it, it was discussed at length, but as far as I not followed through with.

It was a stunning marquee, you can still see the upright ‘poles’ in the picture at the top of this page. Thanks for posting. —jw

Here is a 1956 photo of the Boulevard Theater.

I worked my first job at the Boulevard Theater from 1981 through 1983. I was 15 years old at the start. We had a lot of fun there. Old fashion theater where I eventually was trained to do everything. Good work experience for later in life. A lot of odd ducks worked in that industry as well so that was interesting too. One of our managers was convinced it was haunted and we would stay up late in the early morning hours sitting in the theater spooking ourselves out. The really brave ones went into the tunnels under the old stage. It closed around 1984 about a year after I left.