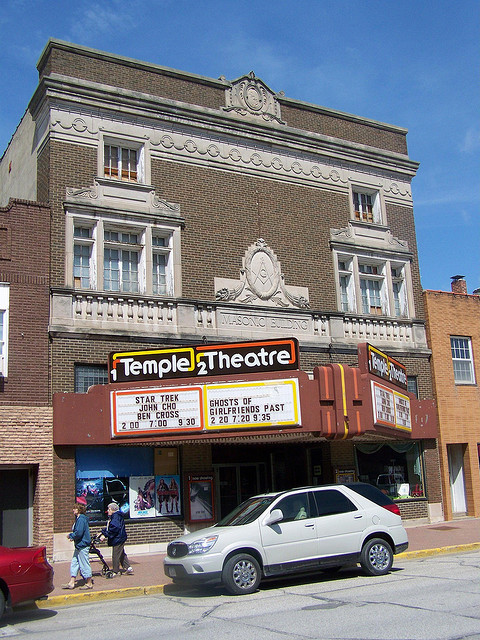 The Masonic Temple Theatre was opened in 1923.

The Masonic Temple Theatre was built in 1923 and designed by the Kansas City architectural firm of Owen, Payson, & Carswell. Architect Robin B. Carswell left the firm by 1925 and was replaced by William Sayler.

As Owen, Sayler, & Payson, (Albert S. Owen and Charles H. Payson were the other partners) the firm designed the Ararat Shrine Temple in Kansas City (1926), which would also later operate as a movie theater and would also be listed on the NRHP, as part of the Eleventh Street Historic District.

After establishing his own practice, Carswell also designed the Memorial Auditorium at Burlington, Iowa.

I just performed there, last Friday night with my comedy improv troupe, Guys In Ties. The owner did very good of bringing it up to modern amenities while still keeping the original feel of an old movie house. The large third floor hall, once used as a Masonic lodge, is being turned into seven apartments.

I went here back in the early 70’s when a high school friend of mine did a road trip to visit his friend there. Stayed at the Harland House! Great landmark as well. So glad it’s still showing movies after all these years!