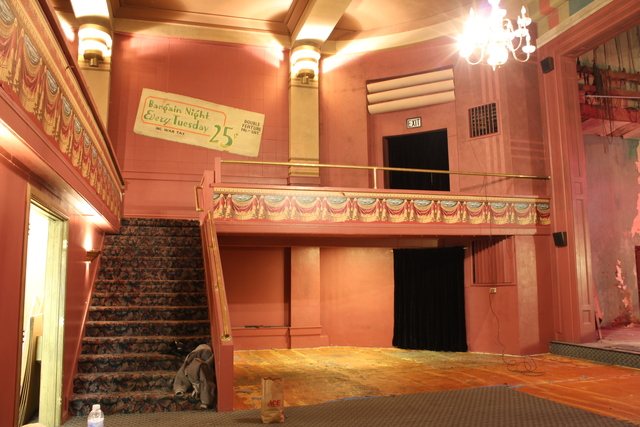 The Lyon Theatre opened in January 1919 with 750 seats. It also had a ballroom. By the early 1940’s it had been renamed Rapids Theatre, with seating listed at 530. It was operated by Pioneer Theatres during the early-1940’s and then by Berger Amusement Co. until it closed in the late-1970’s.

Used as a restaurant for many years, in 2011, proposals were put forward to renovate and reopen the theatre.

ROCK RAPIDS, IOWA-Gerald J. Smith of Sioux Falls has purchased the Rapids Theater building and business from the Berger Amusement Company of Minneapolis. Purchase price was said to exceed $70,000.

The Rapids was taken over in 1936 by the Pioneer Theater Corp. of Minneapolis. Later it was owned at different times by Sam Karatz of Minneapolis and by Gordon Green, also of Minneapolis. The Berger company purchased the house in 1945. Since 1948, Bernie Pretz and Stan Moyle have managed the theater for the Minneapolis firm. Moyle may stay on awhile for the new owner.

Stan Moyle was my grandad. Crazy to see this.

The Rapids Theater, originally the Lyon Theater, opened in January of 1919 as vaudeville and silent screen picture house. It was built by a local successful farmer rancher who had had the desire to bring the magic of stage and cinema to the area. It was built for $15,000 and sat 750. A ballroom dominated the full length of the 3rd floor with its own balcony and orchestra loft. It was hot spot for local dances well through era of the Charleston and through the era Big Band Swing and into early Rock n Roll. The Theater closed as a picture house in the late 70’s and various attempts were made to revive the picture house but the industry was too weak in rural America. A furniture store and community theatre occupied the space until the mid 90’s when it was retro-fitted into a restaurant and survived in different incarnations of a fine-dining establishment until 2008 when it closed its doors seemingly for good. Struggling under bankruptcy, crippling leans, an aging roof raining throughout the building, and a structure in disrepair with 50% of it unused and un-maintained for nearly 50 years; hope was in short supply. But out of the crumbling plaster, dripping ceilings, and shadowy recesses community members were discovering a passion for the past and a vision and dream to revive a community and re-light the lamps of a glorious past and illuminate a future full of potential, music, movement and hope. In 2011, a non-profit society formed for the preservation of this cultural and historical gem. The Rapids Theatre Preservation Society purchased the property and through the community’s efforts and generosity have begun extensive renovations to reopen the theatre as a community event center and performing arts hall. Plans potentially include a coffee house, restoration and reopening the 3rd floor ballroom, updating the theatre arts equipment, and updating the film equipment to allow for second showing movies on weekends and special events. Get involved and learn more on Facebook with the Rapids Theatre Preservation Society.

An historic downtown Rock Rapids landmark has been saved from the wrecking ball. Not too long ago, some in the town considered razing the entire half-block of buildings where the Rapids Theatre stands, and replacing it with brand new construction. But now, The Rapids Theatre in Rock Rapids is breathing it’s first few breaths of new life. The building has been purchased by a group calling themselves the Rapids Theatre Preservation Society. And vice president of the group, Matt Dengler notes that the unique spelling isn’t an accident. Instead of theater ending in “er” and denoting a place where movies and dramatic productions are shown, the group opted for the “re” spelling of theatre — to emphasize the theatre craft and the performing arts. The non-profit group was established to restore and reopen the historic Rapids Theatre. In its infancy, the theater hosted dramatic acts and the ballroom on the third floor hosted big bands, including the famous Lawrence Welk and Myron Floren. In its golden age, movies were shown there. When the theater closed, it served as an interior decorating shop and a then a sewing shop for a while, with a community theatre stage in the back. Eventually, in the mid 1990′s, it became a restaurant, called “The Intermission”. It went through several owners and even an extra name for a few months, but after it closed in December, 2008, it went back to the bank. Most of the fixtures were sold to make payments on the loan. The roof has leaked for a long time, and was leaking during the time the building stood empty. That did some damage to the stage. However, an architectiual firm has deemed the building structurely sound. The group is presently waiting for a company to come in and remove some mold. The famous “RAPIDS” marquis is back and the roof is being repaired. [The Rapids Theatre Preservation Society board of directors is comprised of President Jackie Telford, Vice President Matthew Dengler, Treasurer Norma Jansma, Secretary Kathy Van Berkum, and board members Jim Wells, Tom Menage, and Dorothy McCormack.] Dengler says the idea is to make the theatre into a performing arts community events center. He says it could be used for dramatic productions, art shows, musical performances, weddings, or other events — especially those where a stage is needed. Although they are removing the kitchen, they do plan to have a caterer’s kitchen, says Dengler, so the building would still be a great venue for events such as a dinner theatre. He says they may even entertain the idea of a coffee house in front, but that remains to be seen. In the mean time, Dengler says the group is looking for more funds to clean up and renovate the building, and volunteers to help with all the work.

This notice from The American Contractor of June 16, 1917, might be a bit early for a theater that didn’t open until January, 1919, but it does fit the description of the Rapids Theatre, and local sources indicate that E. A. Hunt was the original owner of the house:

The June 27, 1917 issue of The American Architect also carried a notice about the project:

“J. J. Crossett, Architect, 401 Frances building, has completed plans for a theatre and amusement building to be erected at Rock Rapids for E. A. Hunt of that place. The building will cost about $20,000.”