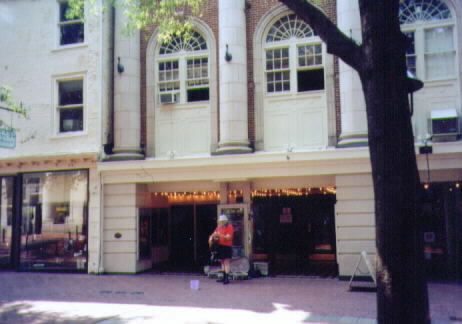 The Jefferson Theater was built in 1912 in a Greek Revival style by architect W.W. Keenan. (The building had previously been a bank built in 1901.)

In 1969, the Jefferson Theater was renamed Cinema Theater.

In January 1984, the Peanut Gallery balcony became its own auditorium, with 184 stadium seated seats and a movie screen 12.5 high x 23 feet wide. The main floor auditorium of 369 seats has a movie screen 12 feet high x 26.5 feet tall. Renamed The Movie Palace the theatre switched to second run movies because of competition from suburban multiplexes.

In 1993, the theatre returned to its original name, the Jefferson Theater.

The Jefferson Theater closed on June 15, 2006 for restoration and renovations to be carried out and re-opened onNovember 27, 2009.

The Jefferson Theatre is located at 110 East Main Street and it seated 763 people.

In the 1990s the back of the theater (behind the screen) where there is a small stage was used to through raves. Sometimes movies where shown at the same time in the front so you could take a break from dancing.

Below the stage (or still is?) an apartment that had an outside entrance on Water street.

Just looked at the exterior photo with the marquee and vertical JEFFERSON sign which was there in the 40’s, but not today! I guess the 4 businessmen who bought the theatre and changed the name to THE CINEMA (now that’s creative) decided to make other changes, as well!

And when was the decision to TWIN it made?

Patsy:
The theater was twined by enclosing the mezzanine in 1983. I took a peek in while the demo of the enclosures over the two balconies was taking place a year ago. It’s a spectacular view up to the top. Although work appears to have stalled for now, the theater will be a splendid intimate music venue when restoration is completed.

The Three Stooges Fan Club is trying to verify the exact times/dates that The Three Stooges msde a personal appearance at the Jefferson. It was mentioned in a newspaper regarding the re-opening, but no dates were shown. Please email me,
Thanks, Frank Reighter

An article about the restoration of the Jefferson and its history: View link

Mid `70’s photo as the Cinema Theater at the bottom of this link.