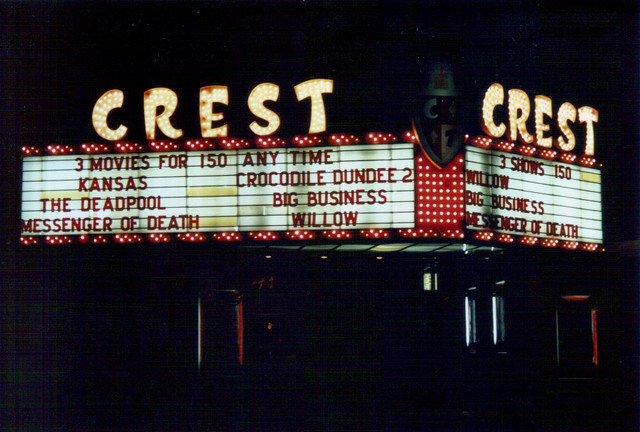 The West Coast E. Street Theatre opened on May 20th, 1925 under the directions of West Coast Theatre, Inc., later known as Fox West Coast Theatres. The opening feature was First National’s feature “I Want My Man”. Also on the program that night was Fanchon & Marco’s “Idea” and “The Love Pirates” direct from Loew’s State Theatre downtown Los Angeles. On the Wurlitzer Miss Margaret Overman accompaning “The Voice of the Nightgale”, ‘A new Cinema Novelty in Color’. Opening manager was H.L. Hartman. The theatre featured vaudeville also during that time.

The theatre was operated by Fox West Coast Theatres in their District 5 along side the nearby Fox California Theatre, Fox Theatre, Studio Theatre and Temple Theatre. After the theatre left the Fox chain, it was renamed the Crest Theatre on June 15, 1960 and in the mid-1960’s it was twinned and operated until the mid-1990’s when it was demolished around 1994. It is currently a parking lot.

This was an OK twin,opened as a single screen by Fox West Coast,it had a large screen downstairs and a smaller one up a staircase where the original balcony was back in its hey day.

When i was a kid in the ‘80s,both screens would have triple features for a $1.50 “Platoon”,“Spaceballs”,“Hiding Out” and the Prince concert movie “Sign O’ The Times” were just a sample of movies that played here.

A couple doors away was one of the last surviving Pussycat theatres at the time.

Here is another 1983 photo:
http://tinyurl.com/cldsbo

Here is a night view from the same date:
http://tinyurl.com/ct3ztz

The West Coast Theatre was part of an office-commercial project called the Platt Building, erected for local developer Frank C. Platt. The project, planned from the beginning to include a large theater, was designed by San Bernardino architect Howard E. Jones.

The West Coast Theatres circuit signed a lease for the theater before the project was publicly announced. West Coast brought in Los Angeles architect Lewis A. Smith, who had designed a number of projects for the circuit, to work in association with Jones on the details of the theater. Jones was not unexperienced in theater design, having been the architect of the San Bernardino Municipal Auditorium, erected in 1923. He is also credited with the rebuilding of a Savoy Theatre at San Bernardino in 1921, and late in his career designed the Arrow Theatre at Fontana, California.

Fred Stein Theatres acquired the West Coast Theatre in 1960, and immediately began renovations. The house reopened as the Crest in June that year, according to Boxoffice of June 20.

There’s a nice story of the time Bela Luosi made a personal appearance here on December 31, 1953, recounted in the book “Hollywood Rat Race” written by none other than Ed Wood, Jr. (I borrowed a copy from my local library!)

May 20th, 1925 grand opening ad as West Coast in photo section. As well as a picture.