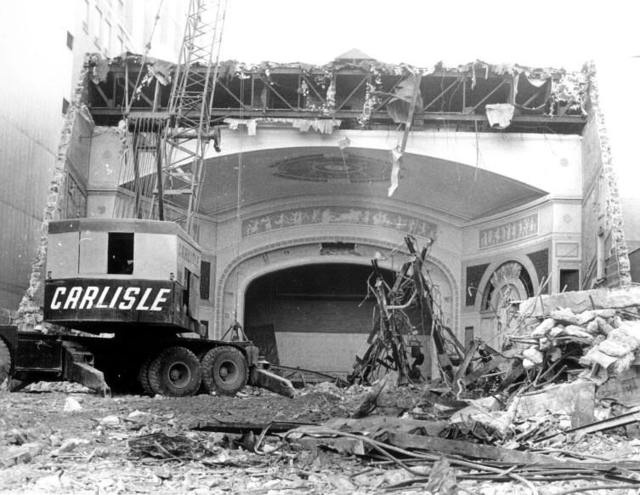 It was a really cool theatre. It had a big oval mezzanine that was open to look down into the lobby. The balcony had more seats than the orchestra level! I watched a lot of Disney movies growing up in the 1960’s then went on to see concerts such a Phoebe Snow, Lou Reed, and George Carlin in the 1970’s. My grandmother gave me a table that was in the upper level lobby that has a mirror top and painting on the side.

I remember it being very plush. In the women’s restroom they had about ten chairs in front of a big mirror for primping and lots of velvet chairs throughout the theatre.

On February 9, 1972 Loew’s sold the building and it was taken over by the owners of the Victory Theatre across the street. Re-named Palace Theatre it was used for concerts, but this was short lived and it closed on September 28, 1975 and was demolished in October/November 1975.

News reports at the time stated that an office block would be build on the site which would include two theatres on the ground floor, but this never materialised and the site remains an empty lot, used for parking.

Schenck & Williams designed the Dayton Theatre in a restrained Beaux Arts style, as can be seen from the photographs here, in the August, 1920, issue of the professional journal Architecture. There’s also a floor plan. Scroll down to see a page with four interior photos.

The Internet Archive reader displays the photos as they were published, so some face sideways on the monitor, and there’s no mechanism for turning them right side up. Fortunately, they can be downloaded. Resize the pages using the + sign in the toolbar at lower right, then right click and save as usual. Any decent image viewer program should be able to rotate them. I’d recommend IrfanView for anyone who doesn’t have it. It’s free, and fairly easy to use.

Thanks to Ken Roe in the UK he directed my steps to the Loews Dayton Theatre only to read that this theatre is gone and that “the site remains an empty lot used for parking”. So sad and so shameful that Dayton no longer has this treasured cinema!

When theatres like the Dayton came down in the 70’s for most likely Urban Renewal didn’t the folks of these communities ever think they would need or want a place to show movies, plays and musicals? They had this theatre and then let it be demolished for “an empty lot used for parking”.

http://youtu.be/xYhR_kHpJUY
Above is an url to a little video I posted on YouTube of the Loews Theatre. I used only the few photos that I had at the time so it is short.

I worked here as an usher from June 1969 to June 1970, Carl Rogers had been manager from 1951 until 1970 when he transferred with Loews to Florida. He had a great 50th anniversary promotion in 1968. I go to walk the building just as the contractors where preparing to demolish the old palace. I wish I had gotten a piece of the balcony carpeting which featured the MGM lion logo.

I was part of the team that operated The Palace from 72-75. Though it is sad that the out of town ownership (NY based group that also owned the Empire State Bldg)elected to raze this historic movie monument it did provide many tremendous sold out rock n roll, funk, and jazz shows under the leadership of James Burt. The stage featured shows by emerging artists of the day like Aerosmith, Joe Walsh Barnstorm, Kiss, Kansas, Wishbone Ash, George Benson, Parliament Funkadelic, Jackson Browne with Phoebe Snow, Soft Machine, Hawkwind, Bachman Turner Overdive, and many, many more. BTW, the carpet on the upper loge level, which I was able to obtain some of, featured the lion logo along with the words Loews and Metro Goldwyn Pictures. It was before the entry of Louis B. Mayer onto the operation.

In over 46 years, starting here in the theatre business, it is the only theatre I have found the projection booth off the mezzanine shooting the picture from the front of the balcony, 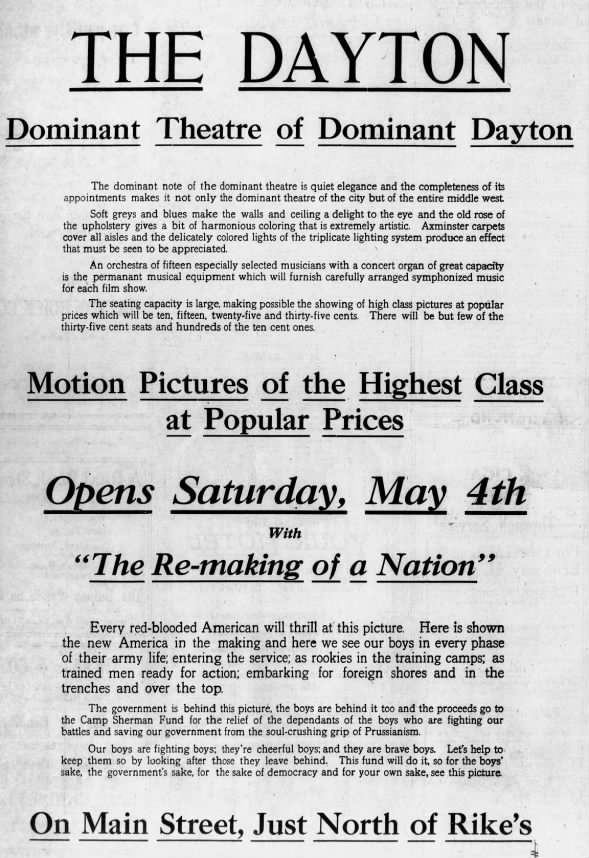 Reopened as Palace on February 9th, 1972. Grand opening ad in the photo section.

In its final year of operation, the Palace was busy with simulcast boxing, movies and live stage presentations including concerts that included acts such as Kiss, Queen and Barry Manilow. The theater went out in style with a vaudeville burlesque show on September 28, 1975. A salvage sale accompanied its demolition in October and November of 1975.