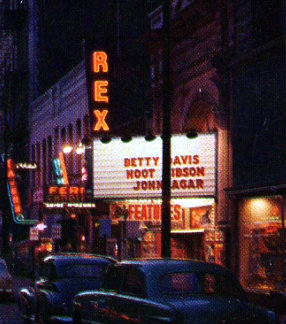 Opened as the Empire Theater on August 22, 1908. It became the Rex Theater on May 11, 1912. Prior to the inception of talking pictures, the Rex Theater was owned by the Will Starkey Theaters Company. In 1928, the theater was sold to C.G. Bowman and Jack Hoeft. It was closed in 1983 and was demolished in 1990.

Here is a small photo of the Rex in 1913, from the trade journal The Moving Picture World.

The Rex Theatre was on the north side of W. Riverside Avenue a few doors east of Washington Street. WorthPoint currently has a postcard on display (second card in the popup slide show- some browsers might not be able to fetch it) which they date 1955. The Rex was open at that time, showing a Bette Davis movie.

If the date is correct, the movie was probably “The Virgin Queen” (the marquee isn’t really readable in the online display.) The newest cars I can pick out on the street appear to be from the early 1950s, so the Rex was certainly open at least that late. It’s definitely the same building as the one in the 1913 photo I linked to in my previous comment, too. The arch is recognizable, though partly obscured by a modern marquee.

A brief history of Spokane’s movie theaters published in the July 15, 1913, issue of The Moving Picture World says that the house that became the Rex Theatre in 1912 had actually opened on August 22, 1908, as the Empire Theatre, a Cineograph house. Cineograph was an early process for making movies with sound. The article doesn’t say how long the Empire operated as a Cineograph house, but does say that B.W. Copeland took over the theater in 1912, remodeled it and renamed it the Rex.

A May 20, 1944, item in The Billboard mentions a Nu-Rex Theatre in Spokane, which was probably this same house. Nu-Rex operator James A. Pike had taken over the Empress Theatre and established a policy of first-run movies with a stage show at that house, and had abandoned stage shows at the Nu-Rex, switching it to an all-movies policy on January 1.

A comment by Dave Zarkin on this Blogger post gives the address of the Rex Theatre as 326 Riverside Avenue, and recalls that in the mid 1960s the house was showing what were then called “girlie movies,” which I’m quite sure are not the same thing as “chick flicks.”