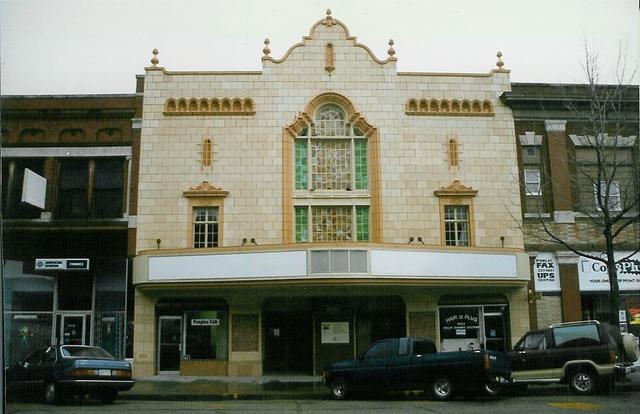 It offered a variety of arts, news, and entertainment as well as its main movie feature. The interior was worth the price of a ticket; and as Mr. Rothafel of Roxy theatre fame once stated, “We sell tickets to the theatre, not the movies”.

The Booth Theatre was in operation until April 20, 1980. A church congregation purchased the theatre and used it for services until 1987. The Booth Theatre Foundation was established in 1991 for the purpose of preserving, restoring and operating the theatre as a performing arts and motion picture playhouse.

As a contributing community member, the theatre will be host to community theatre, recitals, seminars and classic film series. The Booth Theatre was listed on the National Register of Historic Places on October 13, 1988.

Reconstruction began in 2007 and is currently underway on the renovation of the first front quarter section of the theatre.

From 2010 photo of the Indepencence Theatre in Independence. [Please click on thumbnails for larger view].

A PDF file of the NRHP nomination form for the Booth Theatre can be downloaded from this link. An interesting revelation in the document is that Lee DeCamp was the supervising architect on the Boller Brothers' Booth Theatre project.

In 1939, the Booth Theatre became part of the Griffith-Dickinson theater chain. The company was in the process of remodeling and renovating many of its theaters, with plans for all the projects being done by the Dallas architectural firm Corgan & Moore. According to the August 19, 1939, issue of Boxoffice, the Booth Theatre was one of the former Dickinson houses that the newly combined circuit was updating.

The new marquee added as part of the project, seen at top right on this page of Boxoffice, appears to be the one still on the building.

The Booth Theatre was opened by Glen Dickinson Enterprises on February 4, 1927. The February 7 edition of the Neosho Daily Democrat, Neosho, Missouri, reported that Hugh Gardner, operator of Neosho’s Orpheum Theatre, had been among the people attending the opening.

Nice article with a update on The Booth here: https://abandonedks.com/booth-theatre/?fbclid=IwAR09AGa3YbjzOuNs1Yde3K73HDbOZriclaJnS1qSGZZEOOvjZ3nfd2boCok