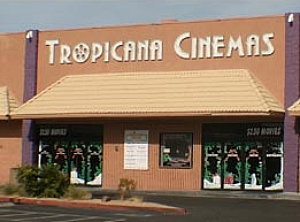 This theater originally opened in 1985 as the Paradise 6 (presumably because of its proximity to Paradise Park) and was a first run cinema. I remember seeing odd movies such as “The Ninth Configuration” and “Dr. Caligari” there as well as awesome events like the 1988 restored “Lawrence of Arabia”. Also, I saw “Aliens”, “RoboCop” and “Prince of Darkness” there among many, many others. Later it became a second run. As recently as 2007 I saw “Tenacious D and the Pick of Destiny”. It is, as far as I know, the ONLY movie theater left in Vegas not connected to a casino (excepting the Drive-In) and the last theater left (again with the exception of the drive-in) from before the 90’s.

Most of our theatres are in casinos now, but there are still quite a few that are not. UA Rainbow Promenade, UA Showcase, Regal Colonnade, Regal Village Square and Rave Town Square are all standalone theatres.

You are probably correct about Tropicana Cinemas being the oldest theatre left in Vegas, aside from the drive-in of course.

While I did visit this theater location in the 80s and 90s, I don’t recall what I may have seen.

I do know I saw Scary Movie at this theater, then drove to the Walmart up the street and bought it. I also saw Marmaduke and one other film. And you can find me, every first Saturday of the month, doing the Rocky Horror thing! Let’s do the Time Warp again!

when i was younger i’d go here an actually see movies that weren’t discounted. now they have $1 movies.

When many of the bigger Vegas Theatres were loaded with Summer Blockbusters, My family and I saw a few oddball flicks here, including “UHF” and “Bingo” (from 1991). Glad to see it’s still open. There was this amazing promotion back in February of 1995. The first interactive movie, “Mr. Payback,” had a brief run here. Won the tickets on KLUC 98.5, and the theater was fitted with a built-in remote that let you vote on various outcomes while watching the 30 minute (or maybe 45 minute) film. It was a disaster, to say the least. But, I did have fun picking Robert Englund to appear on screen, instead of the “Riddler” from TV’s “Batman.” Time Warp, indeed.

I was one of the assistant managers at this theater back in 1988 / 89. Remember when the movie “Colors” came out, all the thugs came to see that movie, wild crowd but no fights, gangs were really the new thing back then.
It was a fairly nice theater back in those days, with first run movies playing, not a discount theater. I was working the day the plant blew up in Henderson (believe it was producing rocket fuel). The explosion didn’t break the door class but it blew the doors open, that was an experience.

Function should be: Movies (second-run)

Closed in 2000 and reopened as Tropicana Cinemas on April 23rd, 2004. Another grand opening ad posted.