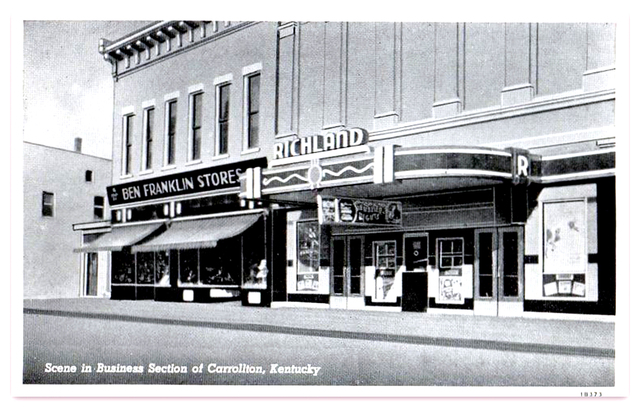 It’s my understanding that the Richland Theater used to be the Richland Opera House, and the original theater was on the second floor. There was an odd enclosed staircase on the corner of Main and Fourth. The entrance is visable in the 50’s postcard view. You would go up the stairs and cross through the corner building to get to the theater. Later it was a movie theater and at some point the theater was moved to the first floor. I think the old building had burned around the time of the ‘37 flood. Perhaps that’s when it was rebuilt as a street level theater. I remember seeing TARGETS there, a film from 1968. Also HOUSE OF DARK SHADOWS, a film from 1970. I think the last film they showed was probably THE LOVE GOD with Don Knotts, which is listed at IMDB as an 1969 film, but they may have been showing it later. I recall the theater was out-of-business and the poster for THE LOVE GOD? was left on display outside for a long time afterwards. Years later the Richland and other buildings on that corner were destroyed by fire, and nothing has been built in their place.

From Carrollton a postcard image of the Richland Theatre.